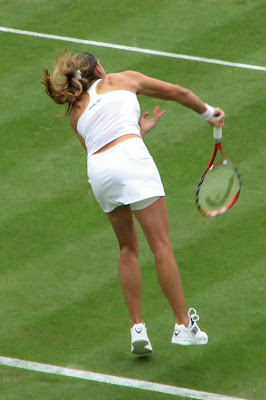 Photo courtesy of After Atalanta
I have been thinking about Amelie Mauresmo lately. She is my favorite player on the tour, so naturally, I would not let her go out of my mind. But she does seem to have gone out of the general tennis conversation, and that is a shame.

For those of us who held faith for years with Mauresmo, a happy day occurred when she won the 2005 Sony Ericsson Championships. It was a big day for her, too--one that turned her around psychologically. She began the next season by winning the Australian Open, and though she won it in a rather odd way--with opponents all around her dropping like flies--she nevertheless won it. But it was not the occasion it should have been for Mauresmo, since her opponent in the final, Justine Henin, was one of the players who dropped.

But Wimbledon would arrive, and once again, Mauresmo found herself in the final, again opposite Justine Henin, who was attmpting to obtain her career slam. Mauresmo won the championship in three sets, and her long-delayed moment of glory was felt by all her fans. I celebrated with champagne.

I always attend the Family Circle Cup, and in 2007, I was thrilled because Mauresmo was entered in the tournament. Then came the appendicitis, and she had to withdraw from a series of tournaments, including the Family Circle Cup. It took her a long time to recover, and when she did, her abdominal muscles were still weak; she sustained an abdominal injury shortly after going back on the court. That, too, took a while to heal, and by that time, Mauresmo--never known for her self-assurance--was in no woman's land.

This year, Mauresmo has struggled with a right thigh strain, a rib muscle injury and a left thigh injury, and she has subsequently tumbled to a ranking of number 36 in the world. Overlooked for a singles slot on the French Olympics team, she decided to forego the Olympics altogether. As of now, Mauresmo plans to play in Cincinnati and New Haven before competing in the U.S. Open, her least favorite major.

The Frenchwoman with the dry wit, beautiful one-handed backhand, and elegant game is now 29 years old. Years ago, she modified her serve in order to prevent the return of a chronic back injury, and after she did that, she remained relatively healthy until the incident of 2007. If she could get healthy again and regain her confidence, she could climb back up the rankings. She herself has said she believes she has another Wimbledon championship in her. But for now, Mauresmo is the forgotten woman. But not forgotten by her many fans.
Posted by Diane at 4:25 PM

Just curious, have you ever been present at one of her matches?
It is incredibly good to watch her courtside, she is so talented

No, I haven't, David. I was so excited about seeing her in Charleston in 2007, and I was so disappointed when she withdrew. Shortly after that, Hingis withdrew, too, making matters even worse.

that's really a shame, I do hope you get to see mauresmo play before she retires
I was lucky enough to watch her play 3 times and each time i was just amazed at how talented she is (although in the match i saw her play against safarova at the aus open in 07 wasn't quite so good for her)
As for Hingis, I got the pleasure of watching her play singles, doubles and mixed and it was really fun! Such a shame she was forced to retire twice, and both times too young.

oh diane, momo fans have not forgotten....even if the FFT did forget how momo saved france from falling into the 2nd division of fedcup this year. :(

I have a feeling she's gonna be USO champ 08. She is focused and rested, while many others may be fatigued physically and mentally.

don't lose hope! And I really hope to see her at AO09 depends on my schedule.

p.s. check out my latest momo video on youtube. it's called "the nearness of you" :)

been 'awol' for a wee while ..bout of depression - and am catching up on my regular reading, so have about three weeks of posts to read - lots of Friday cats to look forward to! Ah, Amelie....Diane,thank you so much for writing this; now, I wonder if you could answer a very trivial question - I've Googled and searched and can't find it anywhere. Do you know what her favourite colour is? I am in the mood for sock knitting, and got a notion to knit another MoMo pair.....

Claire, I have no idea what Amelie's favorite color is. If it isn't on her website (and I doubt it is), you aren't going to find it.

Amelie has never liked the U.S. Open very much--doesn't care for hard courts, so I wouldn't get my hopes up.

Can you give us a link for the video?

USO hasn't always been Amelie's fav but she did mention at USO06 that its getting better.


this is the link to the Amelie video.
http://www.youtube.com/watch?v=h6BFnRnTfhs

I have another one with 18000 hits called Amelie - so beautiful, you can see it on my youtube page.

sooo looking forward to USO series...feels like i haven't seen momo for months!

Dani, that video is great! Very nice concept (I watched "So Beautiful" too--actually, I believe I'd seen it before--nice). Amelie just radiates, doesn't she?

Anyway, thanks for sharing it with us. I put it in my video bookmark collection so I can watch it whenever I want to.