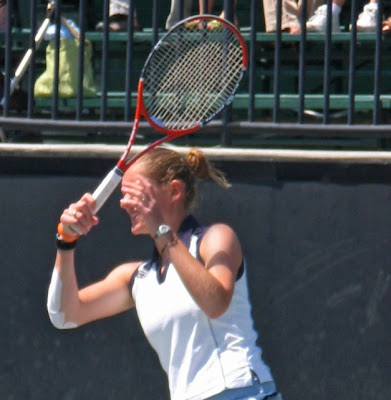 Julie Coin made her tour debut by removing the number 1 seed from the U.S. Open

One had nerves of steel until she realized what was about to happen, then she recovered. The other had nerves of something less sturdy. I did not think Ana Ivanovic was going to make it past the third round of the U.S. Open, but I thought she would get through the second. It wasn't to be, though, as Julie Coin, playing in her first Sony Ericsson WTA Tour event, defeated the world number 1, 6-3, 4-6, 6-3.

Coin is ranked number 188 in the world, which makes this the biggest upset in U.S. Open history. The fact that Coin had never before made it to a tour event adds another amazing layer to this upset. Imagine...you try and try for years, but you never qualify for a tour event. Then you qualify for one, and it just happens to be one of the four majors. You take out the world number 40 in the first round, and in the second, you think--"What the hell? I guess I should go ahead and take out the number 1, as long as I've made it this far."

I saw Coin make one of her failed qualifying attempts at the 2006 Family Circle Cup. She defeated Bethanie Mattek in the first round of qualifying, but then lost to Julia Vakulenko in the second.

Coin served extremely well, and was very steady in her match against Ivanovic. At one point in the final set, she was down 0-40, and she won the game, then went on to break Ivanovic at love. She did get shaky when she served for the match, and it took her three match points to end the affair. The fact that she could end it at all speaks to her remarkably stable state of mind.

Ivanovic has been healing from a thumb injury which caused her to withdraw from the Olympics, and she did not have much match play coming into New York.
Posted by Diane at 5:30 PM