Friday cat blogging--now we are 5! 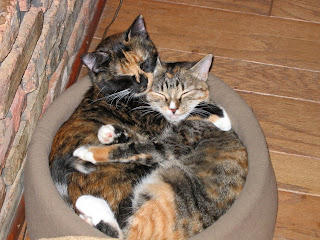 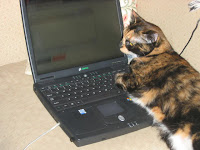 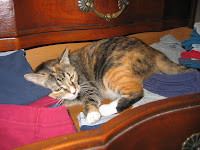 Some time this month--we do not know the exact date--Roxie and Velma had their fifth birthday. The sisters were rescued as kittens by an animal rescue organization whose staff discovered them living with their mother in a yard in a small city outside of New Orleans. The owner of the house (who, of course, had never bothered to have the mother cat spayed), did not want to feed them. They were brought to our community, and we adopted them when they were five months old.

Roxie is wildly athletic, jumping and climbing on everything in the house, and often running fast around corners and hurling herself at walls. She has also broken a number of items--lamps, vases, candlesticks--some of which I valued a great deal; she is the first cat with whom I have lived who has broken things. Velma is calmer and better behaved, and is quite chatty. Being a tortoiseshell, she is easily spooked, however, and goes especially nuts when she sees one of us wearing rain gear.

A couple of years ago, we added two kittens to the household. Roxie continues to have somewhat conflicted relationships with them, though the situation is much better than it was. She is no longer attacking Tarzan all the time, and--though she would deny it--she is seen hanging out with Ziggy rather frequently. Velma gets along very well with both of them; she is, in fact, the resident social director. It goes without saying that the two sisters rule, and everyone knows it.

Roxie and Velma, for their part, are best friends, and they are wonderful friends to us.
Posted by Diane at 8:23 AM

Gorgeous!!! <3 the hugging in bed photo. So sweet!

Roxie and Velma thank you for the compliment, Dani. They love compliments.

Sounds like you are loved by your cats too. I have one cat and he owns the house but we wouldn't have it any other way. Your blog combines two loves cats and tennis. Keep up the good work.