Srebotnik upsets Kuznetsova in 3rd round of U.S. Open 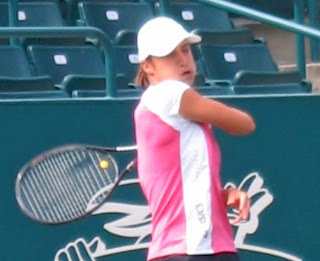 The 28th-seeded Srebotnik, a player of considerable talent who has had a summer of mixed results, was back on track today as she used her steady serve and her doubles-honed net finesse to aggressively remove the third seed from the tournament.

Srebotnik took the first set by one break, and the second went to a tiebreak, which Kuznetsova swept, 7-1. But Srebotnik came back with even more aggression, and prevailed, 6-3, 6-7, 6-3.
Posted by Diane at 6:04 PM