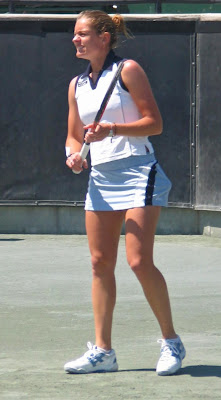 Julie Coin is into the second round of the U.S. Open
Day 2 of the U.S. Open brought about two upsets on the women's side: Anna-Lena Groenefeld, as part of her tour comeback, defeated eleventh seed Daniela Hantuchova, and Timea Bacsinszky defeated seed number 31, Virginie Razzano, 6-4, 6-1.

Other interesting results also came about. Top seed Ana Ivanovic had to fight to stay in the tournament, but was victorious over Vera Dushevina, and Dinara Safina displayed more out-of-control serving. Julie Coin defeated Casey Dellacqua. The battle of the junior stars--Jessica Moore and Melanie Oudin--ended in a 7-6, 7-6 victory for Moore.
Posted by Diane at 10:10 PM