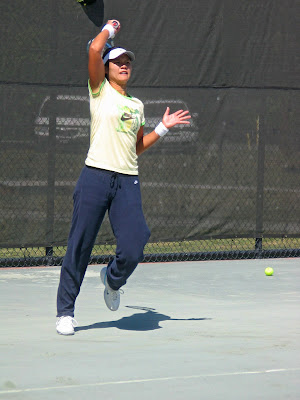 Will Li Na get past Shahar Peer in the first round?
Of course, the qualifiers have not yet been selected or assigned, but so far, here are some first rounds that look interesting to me:

Kaia Kanepi vs. Monica Niculescu: Niculescu has been playing rather well of late, and Kanepi missed a lot of court time because of injury, illness and surgery. All things being equal, Kanepi should get through this easily, but all things are not equal.

Nathlaie Dechy vs. Amelie Mauresmo: The two Frenchwomen are friends, and they have both seen better days in their tennis careers. When Dechy is at her best, she is very good. Mauresmo is looking really good so far in New Haven, however. In fact, she looks like her old self.

Marta Domachowka vs. Bethanie Mattek: Mattek should win this--unless Domachowska is having one of her good days. Domachowska is wildly inconsistent, but on a good day, she can blow just about anyone off the court.

Nicole Vaidisova vs. Petra Cetkovska: If Vaidisova were playing the other young Petra, I would take more notice. But even against Cetkovska, she will have to watch her nerves.

Samantha Stosur vs. Venus Williams: Sam Stosur has one of the best serves in women's tennis--first and second--and she will use it to try to go head-to-head with Williams.

Nuria Llagostera Vives vs. Francesca Schiavone: Here are two extremely tough clay cout specialists who are not out of place on hard courts. The match should be full of grit and craft, and should definitely be fun to watch. It could also be one that goes on for a long time.

Shahar Peer vs. Li Na: Eek--what a first-round match! Li has missed so much tennis because of two major injuries, each of which kept her off the tour for months. She just missed getting a bronze medal at the Olympics. On the one hand, that may have her feeling down, but really--considering all she has been through--her performance in Beijing was quite good. Good as she is, though, Li has never been that tough in the head department, and the patient, relentless Peer could take her to the edge. Peer is streaky, both players are good on hard courts, and anything could happen.

Ekaterina Makarova vs. Anna Chakvetadze: Chakvetadze is so fragile these days, one wishes she could have a really easy first round, just to get her started. Makarova may not give her that, though Chakvetadze should get through to the next round.

Lindsay Davenport vs. Aleksandra Wozniak: Davenport has a bad knee, and Wozniak is showing herself to be a good hard court competitor. If the knee is weak, Wozniack could end Davenport's last U.S. Open early.

Anabel Medina Garrigues vs. Tsvetana Pironkova: Pironkova is kind of the the Sony Ericsson WTA Tour's permanent dangerous floater. She has never been able to do that much with her career, other than cause damage. Medina Garrigues, a player of much skill, is also a hot-head. If Pironkova gets inside that head, something bad could happen.

And finally, my pick for the don't-miss first round match of the U.S. Open...

Tamira Paszek vs. Maria Kirilenko: The most likely scenario is that Kirilenko will glide gracefully around the court, doing what she does, and Paszek will bring a book and her lunch and pull up at the baseline for a long stay. "Contrasting styles" is understatement. I hate to see either of these players go home after the first round, but one will. Actually, I am a bit more intersted in seeing how far Kirilenko can go than Paszek, but I wish both of them could stick around a while.
Posted by Diane at 5:04 PM

If you can totally believe what Lindsay's been saying about her knee it's totally healed and it's not an issue anymore. The interesting thing about this match is Lindsay lack of match play in singles than her knee and if Lindsay is playing well Lindsay in straight sets if she's not playing well a long match and maybe even a loss.

I believe Lindsay, but how many times have we heard players say that, and then--when match play begins--there goes the knee, shoulder, ankle, etc.?