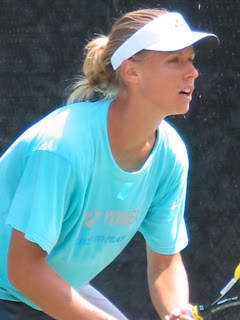 Elena Dementieva, who won the silver medal at the Olympic Games in Sydney in 2000, is the winner of gold at the 2008 Olympics in Beijing. Winning silver was her countrywoman, Dinara Safina, and the bronze medal went to yet another Russian--Vera Zvonareva.

Safina is the tour's hottest player right now, but a rash of inconsistencies even greater than those displayed by Dementieva cost her the gold. This is Dementieva's second title, so to speak, of the year--she also won in Dubai.

Zvonareva began the season very strongly, then lapsed a bit, but has now placed herself back in high contention. Both she and Safina were substitutes on the Russian team: Safina was appointed to the team when Anna Chakvetadze decline to accept her spot, and Zvonareva was added when Maria Sharapova was forced to withdraw because of injury. Zonvonareva defeated Li Na to win the bronze medal match.
Posted by Diane at 2:12 PM