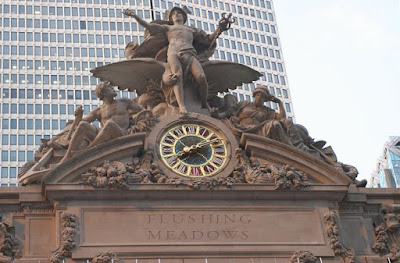 The U.S. Open, celebrating the 40th anniversary of the Open Era, begins on Monday, August 25. Conspicuous by her absence will be Maria Sharapova, but everyone else who matters (assuming Ana Ivanovic's thumb has healed) will be there. In no particular order...

Serena Williams: It is really hard to determine what Williams' chances are at the U.S. Open, but only a fool would count her out of contention. She has looked vulnerable lately, but if she is in the right frame of mind, she can do a lot of damage.

Dinara Safina: Now referred to as the "hottest player of the year," Safina is indeed red-hot. Her come-from-behind antics at the German Open, the French Open and during the U.S. Open Series have created more fan excitement than anything I can recall, but she really does like to cut it a bit close. The winner of the U.S. Open Series, Safina missed getting an Olympic gold medal because of serious problems with her serve. As a rule, Safina--like Justine Henin before her--can get away with some bad service games and redeem them with unusually good serves later, as well as great defensive play. She is going to have to overcome the service bug, however, if she is to win the U.S. Open. If she can keep her serve consistent, I see her as a major contender for the title.

Ana Ivanovic: Ivanovic has had problems with an injured thumb. Assuming that she is not injured, Ivanovic is nevertheless going into the Open without much match play. Anything can happen, but she has a disadvantage this year.

Jelena Jankovic: The eternally-injured Jankovic, if she can stay reasonably healthy in Flushing Meadows, still has a good chance to prevail. She can handle hard courts, her athleticism is superb, and it's about time she won a big one.

Elena Dementieva: The 2004 U.S. Open finalist and recent Olympic gold medal winner has, for all practical purposes, solved her service problem. That makes her dangerous, and she is once again in contention to win the U.S. Open. Like Jankovic, Dementieva can move around the court with speed and ease, and Beijing gold could give her renewed confidence.

Venus Williams: Though I do not expect Williams to win the U.S. Open, I wouldn't exactly fall down in shock if she did. Williams knows her way around a hard court, and if she gets a good draw, anything can happen.

Svetlana Kuznetsova: The 2004 U.S. Open champion is now an official head case. But her talent still puts her into the second tier of contenders.

Daniela Hantuchova: Hantuchova missed a lot of this season because of a serious foot injury. Hantuchova is also a notorious choker. But with all that, she is still always worth watching on a hard court. And who knows? She may even show up in Flushing Meadows with a winner's mindset.

Agnieszka Radwanska: Radwasnka is a savvy tactician who does not give up. She showed Sharapova the door in the third round last year, and she should be regarded as a danger this year.

Amelie Mauresmo: I won't go over all of Mauresmo's woes here, but I will say that she's been looking like her old self in New Haven, and that is a very good thing.

Victoria Azarenka: Victoria Azarenka is getting better all the time. The U.S. Open will provide her another opportunity to improve her toughness and her game. She is definitely worth watching.

Dominika Cibulkova: Considered a clay specialist at first, Cibulkova has shown herself to be a hard court contender. Unfortunately, she has been injured a lot this year, and her rhythm has consequently been interrupted a lot.

Alize Cornet: Like Cibulkova, Cornet first became noticed as a clay specialist. And while she is still better on clay than she is on hard courts, there is plenty of potential there, and she is one to watch. Unfortunatly, as of this posting, Cornet has sustained a left quad strain, so her ability to perform well at the U.S. Open is in question.

Vera Zvonareva: She started the season with a bang, then stalled, but got herself back on track with an Olympic bronze medal. Zvonareva is now back in the top 10, after overcoming all kinds of obstacles to get there.

Caroline Wozniacki: The Danish player has steadily improved, and is once again on my watch list. Like Cornet, she brings some fire to the court.
Posted by Diane at 1:34 PM