'Pova, it won't be the same without you 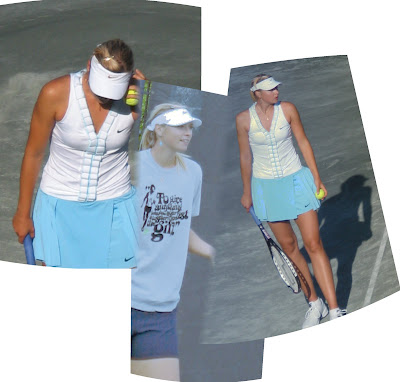 I have come to associate Maria Sharapova more with the U.S. Open than with any other major. She is, after all, at her best on hard courts, and her 2006 win was stunning from the moment she entered the court for round 1. Her 2008 Australian Open win was stunning, too, but there is something about the glamour of the city--and perhaps that wonderful black dress (the red one was nothing to sneeze at, either)--that causes me to associate Sharapova with New York.

I am really disappointed that she will not be part of this year's Open, especially after her unfortunate third round run-in with Agnieszka Radwanska last year. Her doctors failed to catch a torn rotator cuff tendon, and she played with the injury for months. She is now in rehabilitation, and we look forward to seeing her play later in the season. In the meantime--no matter how exciting the U.S. Open is--it just won't be the same without Maria.
Posted by Diane at 5:30 PM

think of it this way Diane, with Pova's withdraw...momo will squeek in as the 32nd seed at USO. ;)

Well, that is indeed a bright spot, Dani.

My friend's parents sat next to her on their way to NYC earlier this week. So she'll be around doing promotional work. It won't be the same though. I do love the Pova.

Thanks for adding me to your blog roll, btw. Quite kind of you.

You know, I thought I had already added you a while back, and I noticed tonight that I hadn't. So you're welcome!

I had heard that Maria would be in New York, and before that, I kind of figured she would be, anyway. I'm glad.

Not Sharapova related, but have you seen the schedule plans (in Tennis magazine) for ESPN2's Open coverage in 2009?

=Second Week=
ESPN2 starts at 11am

Sounds like a comprehensive schedule that should work out well... but I guess you can never FULLY trust ESPN when it comes to tennis coverage.

Yes, it does look great, and no--I don't trust anything ESPN says about its scheduling.