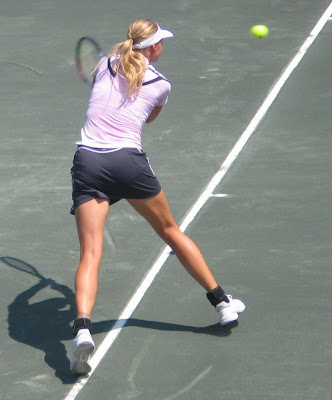 A bit over two years ago, Anna-Lena Groendfeld was number 14 in the world, and she fell on hard times. Those hard times had to do with a bitter split from a coach, and probably some other issues. Her weight changed from bloated to rail-thin, and she just looked troubled in every aspect. Groenefeld has been working her way back in challengers, and she announced her return today at the U.S. Open by defeating the number 11 seed, Daniela Hantuchova, in straight sets.

Hantuchova has had some hard times herself lately. She had bones spurs in her foot that simply would not heal, so she was out for a long time. It is very unfortunate that she is out in the first round of the season's final major, but nice that Groenefeld can take some confidence from this match.

this is the best news, i'm just so happy for her

I knew you'd be thrilled, David. I thought of you as soon as I saw the score.

And you were right, Diane. I even stayed up til 4 in the morning just to watch the live scores tick over!

She gets Jessica Moore next, and I would think she could handle that, then go on to the third round. At that point, she would get either Mattek or Cornet, and things could get tricky.

Yes I expect she would have too much power for moore, and if she was to come up against mattek or cornet, I think she could win, but if she didn't her tournament would still be very successful

I saw her play and win in Rimini - Italy and noticed a very fast brain. She can choose the most offensive option even under big pressure. Not easy at all playing against her.