.@ElinaSvitolina has claimed the biggest title of her career with a stunning comeback against Stephens at @WTAFinalsSG!


It was the "perfect" final: Both players had gone undefeated in round robin play in their respective groups--Sloane Stephens in the red group, and Elina Svitolina in the white group. This is a rare scenario for the WTA Finals. Stephens had defeated top seed Angie Kerber, Naomi Osaka and Kiki Bertens, while Svitolina had wins over defending champion Carolina Wozniacki, Petra Kvitova and Karolina Pliskova.

In the semifinals, Stephens staged a stunning come-from-behind (she lost the first set 0-6) victory over Pliskova, and Svitolina (who also needed three sets) defeated Bertens.

It was only fitting that the final went three sets. Stephens, with her consistent spin and sometimes-lethal forehand, dominated the first set, winning it 6-3. But a determined Svitolina took charge in the second set, taking more risks, and earning a 6-2 victory.

The third set was a continuation of Svitolina's momentum. She went up 3-0, but then Stephens held at love, announcing another potential comeback. That announcement got louder when Stephens turned right around and broke Svitolina at 15. But the momentum swung again, as the Ukrainian moved to 5-2, then broke Stephens to win the WTA Finals.


Elina Svitolina has a deadly record in finals, having now won 13 out of 15. She has, however, underperformed repeatedly at majors, creating one of the more unusual player scenarios in recent history. But today's victory made me think of Amelie Mauresmo's 2005 title run at the WTA Finals. The following year, the talented but "not quite there" Frenchwoman won two majors.

Svitolina's amazing speed and shot-making got her into the top 10. This week, we saw the champion bring something new--an excellent serve. With those three factors--and the grit we often see from her--the Ukrainian star has nowhere to go but up.


2nd seeds Timea Babos and Kiki Mladenovic won the doubles title, defeating top seeds Barbora Krejcikova and Katerina Siniakova 6-4, 7-5. Babos was the defending champion; she and Andrea Sestini Hlavackova won the title in 2017. Krejcikova and Siniakova, who won both the French Open and Wimbledon this year, had played Babos and Mladenovic only once before, and lost that match, also.

Babos and Mladenovic, who won three titles (including Singapore) this year, bring an unusual strength to their team--both members have very good serves (on a good day, they have outstanding serves).

Krejcikova and Siniakoa finish 2018 as the top-ranked doubles team in the world.
Posted by Diane at 9:51 AM 1 comment:

A funny thing happened on the way to this post

Last year, I showed a friend the now-famous New Haven "astronomy" video done by Petra Kvitova, Kiki Mladenovic, Aga Radwanska, and Domi Cibulkova, and he howled with laughter. This year, I texted him the New Haven serve clock video, and the next time I saw him, he told me, "Those women are funny! I mean, they're genuinely funny--they could do a comedy act!"

And I told him, yes--this is one of the many reasons I love the WTA--there is so much personality on the tour, and so much silliness.

The Backspinner calls it "the most interesting tour in the world," and it is (though props to the LPGA, which is pretty interesting, too). And one of the many things that makes it interesting is the vast store of humor that resides within it. From the sometimes-caustic and always clever wit of Maria Sharapova to the unfiltered hilarity of Jelena Jankovic to the self-deprecating, yet intelligent, humor of Andrea Petkovic--any WTA event is a funny venue.

Yes, we watch primarily for the beautiful tennis and the competitive excitement. But we also watch--not just the matches, but the press conferences and the videos--because members of the tour are entertaining in every way. I think back at all the players who have made me laugh--Kvitova, Radwanska, Jankovic, Sharapova, Serena Williams, Petko, Sveta Kuznetsova, Julia Goerges, the Dashas, Simona Halep, Karolina Pliskova, Laura Robson, Martina Hingis, the eternally droll Dinara Safina, and the master herself, Li Na--and I realize just how much I have laughed.

It's important to laugh. I can't think of a more empty state than having no sense of humor. Research shows us that laughter reduces stress and strengthens the immune system. It can also get us through hard times. And--considering how some sports fans take things (unfortunately, even some of the humor) so seriously--the comedy tour that is the WTA provides a lot of relief.

The aforementioned Safina, one of the tour's great philosophers (along with Kuznetsova, Jankovic, Petkovic and Francesca Schiavone), once said, "There are some moments when you want to break all the racquets and send everything to hell." That's true, at least metaphorically, for all of us. Thank goodness we have the comedy act of the WTA Tour to give us some relief.
Posted by Diane at 9:57 PM No comments: 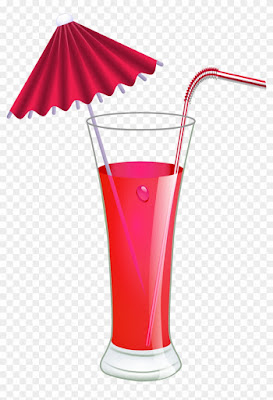 Of all the famous cocktails, perhaps none has been tampered with more than the Singapore sling. The original recipe was complicated enough, but bartenders have changed it numerous times, making it even more complicated. Originally considered a "woman's" drink, the Singapore sling is therefore pink. Here is the Women Who Serve version:

Drink more than one at your own risk! 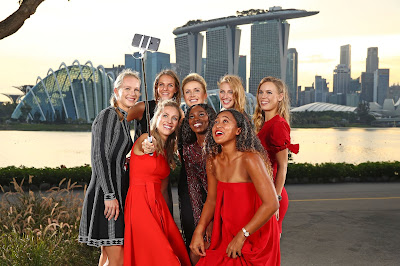 The WTA Finals begin Monday. Kiki Bertens was added after top seed, world number 1, and winner of the Porsche Race to Singapore Simona Halep withdrew because of injury. Caroline Wozniacki is the defending champion. Here are the two round robin groups:

Stephens and Kvitova have winning records over the players in their respective groups. Theoretically, this should give them an advantage--and it does--but the WTA Finals can be unpredictable. I should add, however, that since the courts are playing fast, Kvitova's White Group advantage is somewhat augmented.
Posted by Diane at 12:11 PM No comments:

What is it about the Asian swing?

Aryna #Sabalenka still has an outside shot of making the WTA Finals - can the 20-year-old bring home the title in Tianjin this week?


Perhaps some players are exhausted and others are ready for a new start. That's one theory. At any rate, the Asian swing tends to bring about--if not surprises--at least, new takes on the state of the tour in a given season. Take 2011, when Aga Radwanska won both Tokyo and Beijing (there was no Wuhan tournament then). Or last year, when Caroline Garcia won both Wuhan and Beijing and launched herself into the WTA Finals.

This year, Karolina Pliskova suddenly re-emerged as a major force and won Tokyo, a premier event. Any victory is impressive, but this one may have been especially sweet because the Long Tall One defeated U.S. Open champion Naomi Osaka in the final. Pliskova, in 2016, was considered the Next Big Thing. She reached the final of the U.S. Open. But her results after that were mixed. The 2018 Asian Swing, however, has put her back into the spotlight.

Wuhan, a premier 5 event, was just as interesting. And before I get to Aryna Sabalenka's victory, I want to highlight Anett Kontaveit's run to the final. Kontaveit has risen steadily, and so quietly, she has gone almost unnoticed. In Wuhan, the Estonian player defeated Sloane Stephens, Donna Vekic (another player who is finally reaching her potential), Zhang Shuai, Katerina Siniakova, and Wang Qiang. That's quite a run.

Sabalenka's Wuhan victory came as no surprise to me. The Belarusian has a complete game, and--just as important--a calm confidence. An opponent really does have to beat Sabalenka; she won't give anything away. Her 2019 season should be worth watching.

Finally (of the big ones), there was the China Open, won by Australian Open champion Caroline Wozniacki, who won in Beijing without dropping a set. The victory was her 30th title. Wozniacki and Naomi Osaka are the only two players to win both a major and a premier mandatory in the 2018 season.


The China Open was interesting for another reason: Wang Qiang gave us another outstanding performance, going all the way to the semifinals. In Wuhan, the Chinese player defeated the often-formidable Maria Sakkari, 8th seed and Tokyo champion Karolina Pliskova, Daria Gavrilova, and Monica Puig, before she retired against Anett Kontaveit.

In Beijing--playing as a wild card-Wang defeated 12th seed Alona Ostapenko and then she defeated Karolina Pliskova (this time the 7th seed) again. She followed that with a 7-5, 7-5 defeat of Wuhan champion Aryna Sabalenka, and then was stopped by Wozniacki.

The doubles results have also been notable. The Japanese team of Miyu Kato and Makoto Ninomiya won the Tokyo doubles title, defeating top seeds Andrea Sestini Hlavackova and Barbora Strycova in the final. Demi Schuurs and Elise Mertens won the Wuhan title, and Sestini Hlavackova and Strycova made to the Beijing final, too, and this time--they won.

Of course, there's more to the Asian swing than the premier events. The swing began in Guangzhou, and who won that? Altogether now: Wang Qiang! The Asian swing has put a well-deserved spotlight on Wang Qiang, and she's now one of the players I'm most interested in watching in 2019. Wang has a compelling court presence, a good all-around game and a very good serve.

Back to the other Asian swing events: Charleston and Cincinnati champion Kiki Bertens won the Korea Open, and Margarita Gasparyan won in Tashkent. Gasparyan's victory was one of the sweetest of the 2018 season; the Russian player was out for a long time after enduring three knee surgeries and considering retirement from the tour. She is currently ranked number 138 in the world.

The last two Asian swing tournaments, Hong Kong and Tianjin, will be played this week. The top seeds are Elina Svitolina and Karolina Pliskova (also a wild card). Naomi Osaka has withdrawn from Hong Kong because of a back injury. Also withdrawing were Ekaterina Makarova and Lesia Tsurenko.
Posted by Diane at 2:09 PM No comments: