No, it isn't the title of an article in a trendy Internet health journal--it's the result of the Credit One Bank Invitational, played this week in Charleston at the Volvo Car Open site on Daniel Island. Team Peace, under the leadership of Bethanie Mattek-Sands, was the first to reach 25 points, defeating Team Kindness, whose captain was Madison Keys.

The largest tennis event organized since professional play was halted, the Credit One Bank Invitational also served as a fundraiser for the Medical University of South Carolina frontline workers.

There is no MVP award, but if there were, it would surely go to Jennifer Brady, who--playing for Team Peace--went 4-0, defeating Vika Azarenka and Sloane Stephens, and winning both of her doubles matches.

There was a lot of rain, and during one really intense storm, the court was flooded with purple light, "Purple Rain" was blasted out of the sound system, and the players sang the song. And until Moran confiscated it, Mattek-Sands possessed a pillow with tournament director Bob Moran's likeness on it. The players made public their current playlists, and the entire event had that good-hearted Charleston feel to it. All the matches were shown on Tennis Channel, and the commentators were obviously happy to be able to call a tennis event.

It was so eerie, looking at the empty stands in the Volvo Car Stadium, a venue I equate with crowd humor and enthusiasm. It's also a venue that represents comfort and support for the players, so it was a really good place to hold a team competition. And it was a model for how to hold a tournament during a pandemic--individual "pods" for the players, a no-touch process for ballkids, no handshakes, no hand-slaps.

(I do wonder, though, about the inevitable physical proximity that doubles partners have to have with one another, regardless of precautions.)

I was sorry that Bianca Andreescu withdrew, but her withdrawal didn't take away from the success of the event. It was a pleasure to see such spirited action on the green clay. 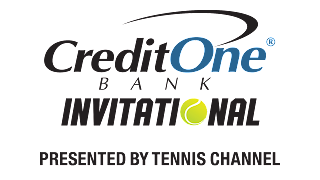 Today, Steve Weissman of Tennis Channel  moderated a press conference featuring a few of the principals of the upcoming Credit One Bank Invitational, which will be held at the Volvo Car Open site on Daniel Island in Charleston, June 23-28. Weissman was joined by Charleston Tennis LLC president Bob Moran and tournament team captains Madison Keys and Bethanie Mattek-Sands.

Moran explained the health measures that will be taken. About a hundred people will be on site—the players, their guests, the event staff, and the Tennis Channel broadcast staff (Weissman, Lindsay Davenport and Chanda Rubin). The Medical University of South Carolina’s back-to-work team has served in an advisory capacity for the tournament. Everyone who enters will be tested for the virus, there will be strict distancing, no handshakes or high fives, and tennis balls will be numbered.

Moran also announced that each player will have her own pod, with a couch, a lounge, and a workout area. He added: “You know, I’ve got to check on these two captains and make sure they’re not going out everywhere in Charleston every night.”

That was just a taste of the humor that wound through much of the press conference. Keys and Mattek-Sands reminisced about the one time they played doubles together, in Rome. They lost, but, Keys said, “The whole time, you would have thought that we were absolutely steamrolling it, and was 6-2, 4-0."

“I’m a little worried about doubles,” Keys added: “I might have to like go watch some of Bethanie’s matches.”

Keys said that “…from the day that Bob told me that I was…in charge of creating a team, I’ve been thinking about it and stressing about it and trying—like, I've got pretty much every scenario that you could have.”  The draft will be held Monday, and will be shown on Tennis Channel at 8 p.m. EST. Mattek-Sands won the coin toss which occurred at the end of the press conference, and will get first pick.

In addition to awarding prize money to players, the event will serve as a fundraiser for the Medical University of South Carolna’s frontline workers. Credit One Bank is a NASCAR sponsor, but this will be the company’s first participation in professional tennis.

Besides Keys (who is the defending Volvo Car Open champion) and Mattek-Sands, the Credit One Bank Invitational participants are:

A fascinating field of sixteen—including 2019 U.S. Open champion Bianca Andreescu and 2020 Australian Open champion Sofia Kenin—will participate later this month in the Credit One Bank Invitational, a team competition that will be held at the Volvo Car Open site on Daniel Island in Charleston June 23-28.

Brady spoke with me last week from Orlando, Florida, where she lives. Like everyone else, she has had to make life adjustments because of the COVID-19 partial shutdown of the country, and the pause placed on professional sports.

She may be a bit luckier than some other players, though, because, she said, several other WTA tour members lives very close to her home, and others live only about ten minutes away. Also, a new tennis academy has opened in Orlando, so the group has a place to hit and practice. Brady described her recent training period as “sort of” normal.

Before everything came to a halt, Jenn Brady had been playing a lot of tennis. Then, when Indian Wells was canceled, she said that she lost a bit of motivation.

“I didn’t know when the next tournament was going to be. That was pretty hard, so then I took a little bit of time off from my tennis. And then Eleanor [Adams] reached out about the Charleston event, and then I was super-excited about that, and happy that they decided to do something, so then I got the motivation back and was able to come back and train and have something to play for.”

Brady’s down time was put to good use, however. “I did a lot of cleaning and organizing my home. I finally unpacked all of my suitcases and sorted through some old clothes, and stuff like that.” Brady describes herself as not much of a TV watcher, so—unlike many of us—her binge-watching, she said, has been limited to one show, Madame Secretary.

So many people have re-considered their priorities during the lockdown, and Brady is no exception:

“I think, you know, to appreciate the job that I have…,” she explained, “that privilege that we’re able to travel and see so many different countries and cultures and being able to compete every week and have a new opportunity every week, regardless of what the result is….I think that sometimes we take for granted being able to see so much.”

She was philosophical about the loss of tour momentum, and when I asked her if she has any specific goals for 2021, her reply was: “No, not exactly—just to kind of see where it takes me,” a decision prompted by a desire not to put too much pressure on herself.

Brady played in Charleston in 2018, and said that she’s looking forward to returning, even though there will be no fans. She also said that she, like so many other WTA players, has very positive feelings about the Volvo Car Open and those who make it possible.

The green clay suits Brady's game, which she employs most comfortably on hard courts. In 2017, Brady reached the round of 16 in singles at both the Australian Open and the U.S. Open, and she reached the semifinals in doubles (with Alison Riske) at the 2019 Australian Open.

The Credit One Bank Invitational will consist of sixteen singles matches and eight doubles matches, and will receive forty hours of coverage on Tennis Channel. 2019 Volvo Car Open champion Madison Keys and Bethanie Mattek-Sands will serve as team captains. The largest tennis event confirmed since professional tennis came to a halt, the tournament will also serve as a fund-raiser for Medical University of South Carolina’s frontline healthcare workers.

“Ever since the unfortunate cancellation of this year’s Volvo Car Open due to the Coronavirus, we have been working tirelessly to figure out how and when to appropriately bring a world class event back to Charleston as quickly and safely as possible,” said Bob Moran, President of Charleston Tennis LLC, in announcing the event. “This tournament will have two equal beneficiaries—traditional prize money for the athletes, and a large fundraising structure to support frontline healthcare workers at MUSC.”