Looking ahead to Charleston

The Volvo Car Open is not only a premier event, but it also marks the beginning of the transition from hard court to clay. The tournament used to be considered truly "transitional" because the green clay of Charleston played a bit faster than the red clay of Europe, but now, some of the red clay courts play rather fast (for clay), so the adjustment depends more on the player.

Last year's champion, Sloane Stephens, will be in Charleston, but not on the courts. The foot injury-recovering Stephens will be at the Tennis Channel desk, and will also be collecting shoes for Soles4Souls. Last year's runner-up, however will be competing. Elena Vesnina, who recently won the BNP Paribas Open (her biggest career title) was also the runner-up in 2012, and she's in a position to make another big run in Charleston.

Other former champions competing in Charleston are Venus Williams (2004), Jelena Jankovic (2007), Sam Stosur (2010), Caroline Wozniacki (2011), and Andrea Petkovic (2014). Wozniacki, it should be noted, was also the runner-up in 2009, and Jankovic was the runner-up in 2012. Both Williams and Wozniacki are having very good seasons, and both can also be viewed as contenders for the 2017 title.

Two of the hottest players at the 2016 event, Laura Siegemund and Daria Kasatkina, have been in relative slumps lately, but stepping onto a clay court could be exactly what each of them needs to get a 2017 boost in points. Last year, they both added a lot of excitement to the event.

World number 11 Johanna Konta will be in Charleston, but stepping onto a clay court may not be such a great thing for her. On the other hand, world number 9 Madison Keys, the 2015 runner-up, could work up some serious mojo again at the Volvo Car Open.

Some very good clay players will be on hand next week--Laura Arruabarrena, Kiki Bertens (perhaps poised for a serious run), Irina-Camelia Begu (she gave Kerber a very tough time in 2015), and 2014 runner-up Lucie Safarova, who is also a contender for the title. One of last year's stand-outs, Yulia Putintseva, will compete, as will Jelena Ostapenko (one just can't mention one without mentioning the other, it seems). And Peng Shuai, who is shining brightly in comeback mode, has a very good history in Charleston.

Also, while clay is not her favored surface, I should add that Mirjana Lucic-Baroni will be back in Charleston this year.

Of course, there will also be some good qualifiers and a few wild cards (this latter category has the potential to be quite interesting). And I'll have some things to say about doubles at a later date.

The draw takes place April 1, the day qualifying begins.
Posted by Diane at 8:56 PM No comments:


I have always wanted to attend Super Sunday, the alternative St. Joseph's Day celebration in which the Mardi Gras Indians return to the streets of New Orleans to parade after Mardi Gras. There are a couple of smaller parades, but the main one takes place in central city. I brought this idea up--back when I thought the Indian Wells final was on Saturday--to a couple of my friends, and we decided to go.

When I learned that the final was on Sunday, St. Joseph's Day, I decided that--following the festival and the parade--I would "tune in" on my phone and catch what I could of the match. Little did I know, at the time, that the final would be a three-hour thriller contested between two players I like a great deal.

And little did I know what a disorganized mess the main Super Sunday "event" would be. We arrived at 11:00 so that we could enjoy the pre-parade festival. Only the "festival" consisted of nothing more than blocks of trucks selling food that I cannot (and do not want to) eat. That was it. No art, no music, no nothing--but lots of heart attack food and plenty of alcohol. It was hot, and there were a lot of people there. I don't do well in crowds, but I was willing to do almost anything to see the Indians.

Finally, there was some entertainment--a hip hop singer took the stage. But no Indians. I sat on the basketball bleachers of the public park/playground, with my earphones in and my phone set to the WatchESPN app. I got pretty involved in the first set, and when it was over, I was sweating, but there were still no Indians.

At 3:00, there were no Indians. I was eating my phone data because the only available WiFi wasn't strong enough to handle video. I didn't care--I was totally wrapped up in watching Elena Vesnina come roaring back after being down a set and a break. It was a great match, which I should have been watching on a big screen in the comfort of my living room, but there I was, either on the ground or in the bleachers, sweating and uncomfortable (and hungry), trying to figure out when my phone battery was going to die.

A very good band appeared on the small stage, but there was no parade. At the beginning of the third set, I turned my phone off. I figured it was better to miss the first half of the final set than to miss the second half. In the meantime, there were still no Mardi Gras Indians. At 3-2, I couldn't stand it any longer--I turned my phone back on. I saw Kuznetsova go up a break yet again, and I saw Vesnina come back again. I was in significant physical discomfort, but I had Sveta and Elena and a pitiful bit of battery left.

At 4:00, there were no Indians. The crowd was huge, and just moving a few feet was difficult. It was a collection of all of my least favorite things--the sun, a big crowd and the sickening smell of food I can't stand. And then--to top off the entire cavalcade of errors--at match point, my video failed.

At 5:00, there were no Mardi Gras Indians. We drove back across the lake. I knew that Elena had won, and--despite everything--I was so thrilled for her. I would have been happy either way, but seeing Elena win a huge title made me especially happy.

The Mardi Gras Indians are known for being late, but yesterday, they gave "late" a whole new meaning. I suspect that had we gone to one of the smaller gatherings, we would have seen Indians. But we didn't. I'm sure there were tourists in attendance who were beyond unhappy that there was no real festival, and that the 1:00 start time was beyond a joke. For all I know, the Mardi Gras Indians never showed up, though I did spot one or two of them on the street as we were leaving.

I was so exhausted when I got home (did I mention that I'd hardly slept the night before?), but I relaxed, had some dinner, and watched a replay of the second and third sets. This time, I got to see Elena win.

I've seen a lot of very thrilling WTA matches over the years, but I've never seen one before under such ridiculous circumstances. Thank goodness for mobile devices. Elena and Sveta saved my afternoon. Unlike the Mardi Gras Indians, they showed up on time and put on a magnificent show.
Posted by Diane at 6:20 PM 3 comments:

It's only a mirage 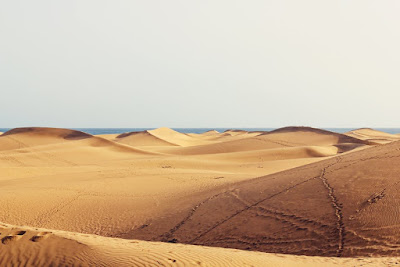 When I was a child, a popular pop culture image was the thin, parched, near-dead man crawling across the desert, desperately hoping to reach what he believes to be a pool of water--only to learn that it is a mirage. This desert image is, in fact, what is known as an "inferior" mirage because the mirage (blue water) appears under the actual entity (blue sky), due to the bending of light rays.

Nadine Gordimer once said "A desert is a place without expectation," but she probably had never attended the BNP Paribas Open. For there was plenty of expectation--and hope in the desert this year. World number 1 Serena Williams withdrew from the event, 2016's Sunshine Double defending champion, Victoria Azarenka, is not on the tour right now, and Maria Sharapova is still out. The path in the sand looked steadier for world number 2 Angelique Kerber, rising star Karolina Pliskova, Simona Halep, and former champion Caroline Wozniacki.

It may look like refreshing blue water, but it's really the blue in the Russian flag, and the blue blood of tour veterans. On Sunday, 30-year-old Russian Elena Vesnina will contest for the title against 31-year-old Russian Svetlana Kuznetsova. Pour some vodka and party like it's 2004!

This is Vesnina's first premier mandatory final. The ESPN commentators made a big deal about Vesnina's changes in fortune between last year's tournament (she lost in the first round of qualifying) and this year's, yet never bothered to mention that Vesnina was off of the tour for a long time because of injury. Her comeback moment occurred in Charleston last year, when she reached the final for the second time in her career. She then went on to reach the semifinals at Wimbledon.

In Indian Well, Vesnina--one of those players with a great serve who can't always find it (though she found it in the desert)--had to go through an especially difficult draw. She defeated Shelby Rogers, Timea Babos, Angelique Kerber, Venus Williams, and Kiki Mladenovic. Quite a feat.

Kuznetsova, who is a two-time major champion (U.S. Open and French Open) is one of the great talents on the tour, but her athleticism and stunning shot variety have often exceeded her ability to remain mentally steady. In Indian Wells, she has looked wonderful, taking out Johanna Larsson, Roberta Vinci, Caroline Garcia, Anastasia Pavlyuchenkova, and Karolina Pliskova. Also quite impressive.

So here we are again, back to the 30-and-over group, and Russians at that. I like it.

There are other players worth mentioning. Kiki Mladenovic, though she appeared mentally tired in the semifinals (until the last part, when she really woke up) is getting closer and closer to stepping into the wide potential we've seen for so long. Wild card Kayla Day made it to the third round, and took out the formidable Mirjana Lucic-Baroni on the way. Kristyna Pliskova's 2nd round dismantling of Daria Kasatkina is worth noting, as is Caroline Garcia's third round upset of Johanna Konta.

In doubles, the third round featured the tennis artist formerly known as Santina battling against itself, with the Hingis half emerging victorious. In that match, Martina Hingis Chan Yung-Jan defeated Sania Mirza and Barbora Strycova. Chan and Hingis also knocked off the top seeds, Bethanie Mattek-Sands and Lucie Safarova, and are in the final. Their opponents will be Lucie Hradecka and Katerina Siniakova, who defeated the 2nd seeds, Ekaterina Makarova and Elena Vesnina.
Posted by Diane at 1:59 PM No comments: