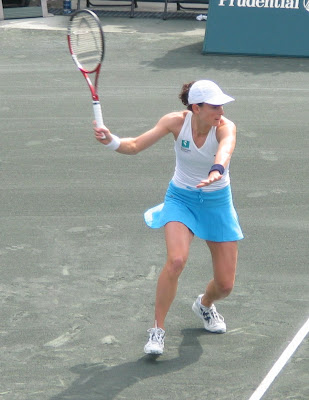 Top seed Katarina Srebotnik hit eleven aces against Nathalie Dechy in their second round match in Cincinnati, but that was not enough to take the match. After two hours and twenty minutes, Dechy emerged the winner, 7-5, 2-6, 7-6.

Moments like this, and like Dechy's epic match against Ana Ivanovic at Wimbledon remind us of how much talent she has. When she returned from a major injury some time ago, she was not able to get her ranking back (it was as high as 11 in 2006), and she was getting older, so she began concentrating on doubles, which really paid off for her. But I like to watch her smart, elegant singles game, and I would really like to see her advance in the rankings again.
Posted by Diane at 9:56 PM

Nathalie Dechy would have to be one of the most underrated players on WTA tour!

And also one of the under-achievers; her game is better than her results. Of course, she isn't alone in that category.

I have always enjoyed watching her. I've also spoken with her a few times, and she has a really nice persona.

yes I was thinking about her results as well, she seems to have much better results in the doubles than singles.