Friday cat blogging--now we are 2! 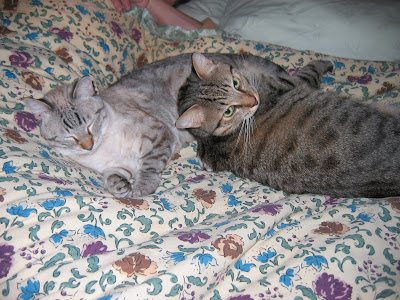 Some time this month, Ziggy Stardust and Tarzan will have their second birthdays. The kittens, who are half-brothers, were rescued from a feral colony. Tarzan seemed hopelessly feral at first, but Ziggy did not have a feral bone in his body. Later, Tarzan became tame, and the two were inseparable. They were supposed to have been foster kittens, but you know how those things sometimes go--they wound up living with us. Roxie, our tabby, has never totally warmed to the idea, though she seems to like them more than she lets on. Her sister Velma, the patch tortoiseshell, has a lot of fun with both of them. I still feel guilty about disrupting Roxie's life.

Ziggy and Tarzan like to fight and play chase. Ziggy likes to get anything he can think of going with the sisters. Late at night, when the others are all in bed, Tarzan--who is very large--drags his toys all around the house.
Posted by Diane at 9:08 AM

Very sweet!! Thanks for the background on the kitties, Diane. I have one formerly-feral male tuxedo and one female rescue cat (apparent runaway, suffered broken leg)-- a beautiful long hair tortie manx. They are also inseparable and assiduously groom each other's ears and heads. It definitely helped that the male was 5 years old and the female still a kitten when she introduced herself. She was far too cute and not at all threatening! As an aside, a long hair manx, known as a "cymric" in the U.K., is really a medium hair cat with a wonderfully silky double coat :>

I looked up "cymric" and saw some photos--one tortie, too--very nice! Isn't it amazing how many cats born in feral colonies are not really feral?

It was hard for Tarzan. We thought he was hopelessly feral, and after the T and N, we did the R. But then--perhaps because of the neutering--he started to tame while he was in the colony. He would come around my husband, who had done the original trapping, and eventually, he was trapped again and brought back here.

It took him a while to catch on. He would pull his food out of his dish and eat it on the floor, and grab his toys (and everyone else's--his first Christmas was a social disaster), take them under a piece of furniture, and growl if anyone came near him. He has changed a lot since then.

Ziggy was another story. He made certain he got trapped, and when he got here, he made certain this would be more than a foster home for him. We had not planned to foster these kittens, but because of Katrina, there were no foster homes available, so they stayed here. A few feral adults went back to the colony, three went to a farm in Georgia, and a total of six were adopted. In fact, through a series of twists and turns, three siblings eventually wound up in one home.

There aren't many things more entertaining than cats at play or up to mischief. I am only now learning of your new kitties. Good for you! Sorry about Roxie. That's sort of how my 8 year old dog, Phoebe, feels about Buttercup, who was a foster that I adopted (I had Buttercup's entire litter of 5 which I took in when they were 3-4 weeks... a whole other story). I wish I could have a cat but I'm allergic. I will feel forever gypped.

Oh also it's funny to me that some feral cats are "social climbers" and actually CHOOSE to be tamed, like your Ziggy. My sister had a feral colony cat named Dot who had a broken/rehealed leg & decided when she got pregnant that my sister should take her in. Immediately tame. She is the cutest thing ever. Unfortunately, she lives with my sister's ex-partner, so I don't get to see her. But she is the only cat who has actually given me a "high-5" upon first meeting.

Helen, I'll be you CAN have a cat. Anitra Frazier, in her wonderful books, explains that dander comes from the digestive glands, and she says to do two things to prevent it: 1. Feed a very high quality diet
2. Do not free-choice feed

We do both of those things, and my friend who is very allergic to cats can come to my house and play with our cats without a sneeze. I have tested this on many people, and so far--no has has had an allergic reaction.

We buy our cat food at a store that sells only natural, extremely high-quality canned food. We never free-choice feed except for an evening snack because our cats are big eaters. But again, that is also high-quality food.