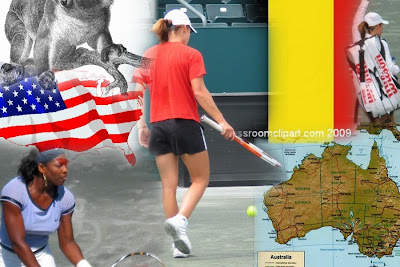 Wrapped in bandages, pushed hard by Victoria Azarenka, and taken to the very edge by Li Na--Australian Open defending champion Serena Williams is still standing. Though she says she is at the point at which she has hit "one forehand too many," Williams is never to be underestimated.

Neither is her opponent in the final, Justine Henin. Henin, just back from what turned out not to be retirement, is hitting the ball harder and is coming to the net more than she did in the first part of her career. If there is really such a thing as a "dream final," we may have it in Melbourne. Provided Williams does not run out of energy or fall victim to too much pain, this match has the makings of a very high-level affair.

Oddly, the two have never met before in a final of a major, so there is already some extra drama attached, just through the luck of the draw. Henin says that Williams is her ideal opponent in a major final because she has to find out whether she can beat the best in the world.

If Williams defends her title in Australia, she will receive her twelfth major trophy; if Henin wins, it will be her eighth. However it turns out, a rivalry has been resumed.
Posted by Diane at 3:38 PM

Two of my all-time favorites. It is stunning that they've never met in a Slam final before. I hope they both play well, and no foot faults, please!

bill, you and me both on the no foot fault thing