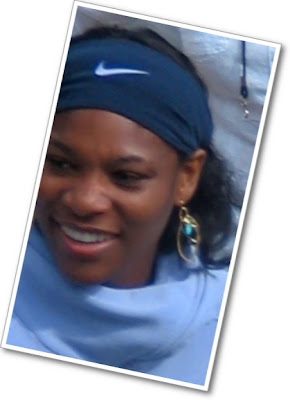 In the middle of the Justine Henin's second Australian Open championship set against defending champion Serena Williams, I leaned over to get a look at her feet. You see, I thought she might have borrowed Melanie Oudin's shoes, so strongly did her belief click at that moment. Henin, who has made up her mind that her "second career" will be one of attacking--rather than her signature defending--tennis, was setting up most of her shots just right against Williams, but was then failing to execute them because of repeated unforced errors.

To make matters worse, she continued to struggle with her serve. By sheer force of will and talent, she took four games off of Williams in the first set. Then, serving at 2-3 in the second set, she faced a break point. Williams failed to convert, and that was when the switch got turned on in Henin. Suddenly, her game plan began to work because her shots became fluid and deadly accurate. She held for 3-all, then immediately broke Williams, held at love, then broke her again at love to take the set 6-3. Going into the third set, Henin continued to roll until a fifteen-point win streak ended. She continued to create break points throughout that set, but by this time, Williams had elevated her serve--and her whole game--to the point that she took back the momentum and never let it go.

That is, of course, vintage Serena. Ask Victoria Azarenka, or any number of other players who have gone on a roll against her, only to find that the now 12-time major champion almost always finds a way to regain her dominance. Williams' serve, of course, has a lot to do with this ability, but the rest of her game also becomes spot-on, once she has confidently placed the big serve.

At one point in the third set, Williams hit was she thought was an ace. Henin challenged it, and it did turn out to be a fault. No problem--Williams then hit a real ace on the second serve. That is the type of thing Henin--whose serve continues to be way too shaky--was up against. Williams won the third set 6-2, fell onto her back, then got up to receive her fifth Australian Open trophy.

There is no denying that Henin is back, and that the new attacking game is going to benefit her. (It will be interesting see if she puts it on big display during the clay season, when she doesn't really need it.) Like so many other players, though, she needs to do something about her service game. Williams is not the only good returner on the tour, and Henin will continue to run into trouble, despite her extreme talent, if she does not do something about her serve. I do like this new Henin at the net, however. Her coach has been pushing her for years to go to the net more, and it appears she has finally heeded his advice.

Williams, unfortunately, once again explained her third-set momentum by telling the press she had to "man up." Will someone please explain to Serena Williams that finding a way to be tough and brave is not a male quality? A woman of Williams' stature continually contributing to the ubiquitous sexism of professional sports makes it even more difficult for women and girls to be recognized as athletes--and people--on their own terms.

Serena Williams continues to play either superior tennis or tennis that takes her through until she can play superior tennis. At this point, the only real question about her future is how well her body will hold up. On the other hand, she appeared at the Australian Open championship match wrapped and bandaged to the hilt, and--though pushed to three sets--won the title.

Williams has now won more Australian Open singles titles than any other woman in the Open Era.
Posted by Diane at 2:27 PM

So funny that you had shoes on your mind while watching this match, as well. Honest, I didn't read what you said until after I posted my wrap-up on Backspin. :D

Congrats to Serena Williams on winning her 12th grand slam and her 11th grand slam in doubles with her sister Venus, Great job!

I'm sure there's some Jungian connection in there somewhere, Todd!