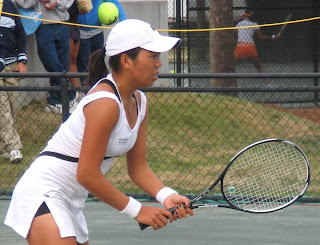 Often, during a major tournament--on an outer court where there are no television cameras--dramatic upsets occur. Today in Melbourne, 23rd seed and French Open semifinalist Dominika Cibulkova was the victim of such an upset. She and Vania King played for just over three hours in a match that had so many odd momentum swings, it probably left people in the stands shaking their heads in disbelief.

King won the first set 6-3, which was in itself a surprise. Things got very serious for Cibulkova in the second set, when King--serving at 5-4--held a match point. Cibulkova saved that match point with a winning backhand, and went on to win the set in a tiebreak. She then went up 5-1 in the third, but King just would not give up. She saved four match points, and the next thing we knew, it was 5-all. King then held, and won the match on her opponent's next serve.

Cibulkova reached the round of 16 at last year's Australian Open, so this loss is going to hurt her ranking. King, who is ranked number 79 in the world, gets either Anna-Lena Groenefeld or Roberta Vinci in the next round.
Posted by Diane at 10:31 PM

Here in Bangkok a couple years ago we saw a similar incredible come back by Vania against our local heroine, Tammy Tanasugarn, to win the Bangkok Open from 5-2 down in the third. Go Vania!

King has always given a good fight, no matter what.