Bondarenko sends Jankovic out of Melbourne 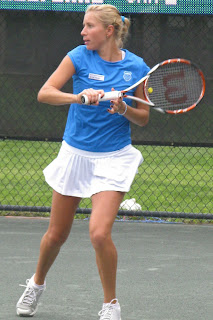 There were times--especially in the second half of the second set--that Jelena Jankovic actually looked like herself in her Australian Open third round match against Hobart champion Alona Bondarenko. But most of the time, she was flat, slow and on the wrong foot. Meanwhile, Bondarenko--who isn't known for staying cool and collected on the court--was the picture of steadiness, serving well throughout, and repeatedly finding wicked angles just out of reach of the 8th seed's racquet.

This was a fine performance from Bondarenko, regardless of Jankovic's level of play. Though in nine other attempts, she had taken only one set off of Jankovic, this time, she got into a cross-court groove early, and stayed in it to win the match 6-2, 6-3. Bondarenko has reached the third round of a major several times, but this is her first time to reach the round of 16.
Posted by Diane at 10:00 PM