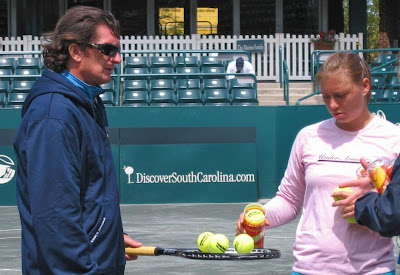 Vera Zvonareva and her coach, Sam Sumyk
While all the talk is about Serena Williams (Can she win another odd-year Australian Open?), Elena Dementieva (She's playing so well--is this her time?) and Dinara Safina (Can she do now what she almost did last year--win a major?), there is another player quietly standing by. And not just any player, but the woman who has easily out-performed every other woman in the 2009 Australian Open. If the championship were decided by overall performance, Vera Zvonareva would already be holding the trophy.

Zvonareva has not dropped a set so far, and she has delivered four bagel sets to opponents. Her next opponent is countrywoman Dinara Safina, and their runs through the Open could not be more different. Zvonareva has cruised through, while Thrill Ride has had to zoom over bumps and around curves and escape near-crashes. She struggled with Alize Cornet (in fairness, anyone would struggle with Cornet), and she is very lucky to have survived an obviously debilitated Jelena Dokic in the quarterfinals.

Zvonareva and Safina played three times last year, all of the matches on hard courts, and Zvonareva won all three, including one in a third set tiebreak. Unless Zvonareva has a meltdown (and she has been known to have them), Safina will have to call on her very best thrilling come-from-behind magic in order to prevail.

Similarly, the last three times Serena Williams and Elena Dementieva played (2007, 2008, 2009), Dementieva won all three matches. Dementieva is playing the best tennis of her career, and Williams is not. But Dementieva--who used to be very mentally tough--has become a bit vulnerable in the head department, and Williams--well, I don't need to explain how hard it is to beat Serena in a major. We should expect a very good match, at any rate.
Posted by Diane at 10:40 AM