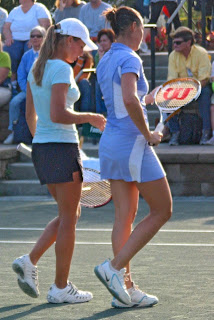 Dulko and Pennetta have played together several times before, and they won in Bogata in 2006. This is Dulko's seventh Sony Ericsson WTA Tour doubles title, and Pennetta's fourth. Those of us who saw them play an unforgettable exhibition match in Charleston in 2007 consider them not just good doubles players, but also very funny and entertaining women.
Posted by Diane at 8:37 AM