Faster than a speeding bullet... 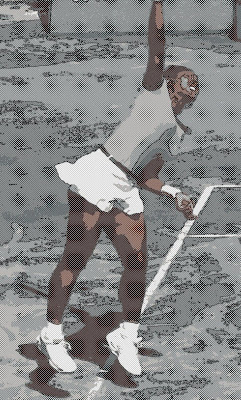 More powerful than a locomotive...able to beat tall Russians in a single hour

Halfway into the first set of the 2009 Australian Open women's final, I was thinking that I had seen it all before, and I had--kind of. The beat-down Serena Williams gave Dinara Safina was very much like the beat-down she gave Safina's countrywoman, Maria Sharapova, in 2007. Williams found her serve. She found it with such authority, that she won the point 95% of the time when she got her first serve in. She was fast, she was aggressive, she was confident.

Could anyone have stopped her? We'll never know, because the opposite dynamic was occurring on the other side of the net. Safina's serve was nowhere to be found. Safina, Ivanovic and a few others should form an "errant ball toss" support group so that the Russian can get some help she can't seem to give herself. Safina is capable of serving quite well--she even served three aces in the final--but when the stakes are high, her serve is the first thing to go. Between that, and the fact that Williams played like a champion from the first point, Safina was completely overwhelmed.

She was so overwhelmed that she failed to win a game in the first set, and she didn't even hold serve until the twelfth game of the match. How Safina handles this humiliating loss will be key to how she handles the rest of the year. It is a shame to see such a good player be such an enemy to herself at such an important moment.

Williams, for her part, has now won ten majors in singles. This was also her fouth Australian Open win, so--regardless what the fans call her--she is Aussie Serena, for sure. She also won the women's doubles title with her sister, Venus, and--at 27 years of age--can dictate play against just about anyone. Williams has had problems in the past staying injury-free, but if she can dodge injuries, she is the clear favorite to do a lot of winning this year.

I have now converted to Serenaism, such was her performance. However, Dinara really let me down today. She shouldn't be ranked second (she'll probably get up to pole position given that she has nothing to defend until April)