Australian Open round of 16 looks exciting 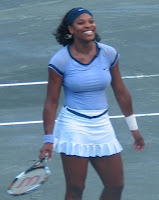 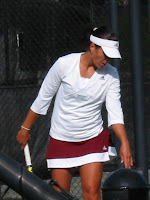 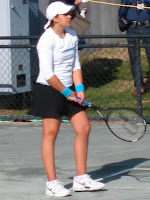 Four of the major contenders are still standing. Serena Williams, Jelena Jankovic, Dinara Safina, and Elena Dementieva have hit their way into the fourth round of the 2009 Australian Open. They are joined by several players one might expect to still be standing, inluding Marion Bartoli, Vera Zvonareva, Victoria Azarenka, Zheng Jie (isn't is nice to say that?), and Svetlana Kuznetsova. The mercurial Nadia Petrova is still around, too, as well as Dominika Cibulkova, Carla Suarez Navarro, Alisa Kleybanova, Alize Cornet, Anabel Medina Garigues, and...drum roll...Jelena Dokic.

These should all be enjoyable matches, and some of them could be dramatic.

Jankovic vs. Bartoli: Bartoli plays well against Jankovic, as a rule, and unless the world number 1 raises her game to a level higher than she has been playing, she could fall to the Frenchwoman.

Petrova vs. Zvonareva: Petrova is Zvonareva's nemesis. Zvonareva has beaten her only once in their careers.

Safina vs. Cornet: Safina says she has more game inside her than what is coming out. Now would be a good time to bring it out; she's going to need it against Cornet, and--if she advances--against the rest of the second-week field.

Dokic vs. Kleybanova: Who knew such a match would exist in the fourth round?! Both players are coming in with a lot of confidence, but Dokic has a bigger trick bag. Still, there are many factors involved in who wins a big match--weather, nerves, etc.--and this could be entertaining.

Suarez Navarro vs. Medina Garrigues: Poor Suarez Navarro just dispensed with one countrywoman (Martinez Sanchez), and now she has to deal with another one. She was probably expecting to get Flavia Pennetta, but Medina Garrigues upset Pennetta, so it's two Spaniards again. Both players probably enjoy the high bounce of these courts, both players have a variety of court skills, and anything can happen.

Cibulkova vs. Dementieva: Cibulkova's fitness will be put to the test by one of the tour's best athletes. Cibulkova's best hope is to get inside Dementieva's head.

Kuznetsova vs. Zheng: Kuznetsova beat Alona Bondarenko for the first time yesterday, but it wasn't easy. She had to save three set points in the first set, and she didn't close the match until she had her sixth match point (she had some help with a double-faulting Bondarenko). Zheng doesn't have the head problems that Kuznetsova has, so the outcome depends--at least somewhat--on how confident the talented Russian feels when she walks onto the court.

Azarenka vs. Williams: One thing we can count on--this match will be loud. Both players are screamers, though in different ways. Both have strong groundstrokes and good volleys. Azarenka has to be filled with confidence after winning Brisbane, and Serena is--well, Serena. She tends to play her way into majors, expending just the energy she needs to in order to get to the second week. I do think we'll see three sets.
Posted by Diane at 1:31 PM

I can see some great matches in there.

Petrova v Zvonareva: - Zvonareva, despite the H to H.

Safina v Cornet: - Safina, unless it's windy or she's angry, then she's done for.

Kleybanova v Dokic: - Tough one. Most would say Dokic but Kleybanova is probably the most powerful opponent she's faced in her comeback.

Navarro v Medina: - If Carla can keep up her form, she should win, but she does have trouble keeping up form.

Kuznetsova v Zheng - It'll be tight, but if Kuznetsova can make the majority of her shots she will win.

Azarenka v Williams - Have no idea

Good analysis, Sasha. I totally agree about Safina and the wind; she simply cannot handle it. She handles wind worse than any other top player. Conversely, Jankovic handles wind extremely well, so if it blows in her match, that's an advantage to her.

I don't think the head to head is going to be that big a factor between Petrova and Zvonareva, but I really have no idea who will win, anyway.

I feel pretty confident that Dementieva will win, yes. With Kuzzy, it depends on her head--the court is to her advantage.

Re: Bartoli, looks like you called it! I was hoping but I wouldn't dare have predicted it out loud.. :)