It's time to talk about doubles 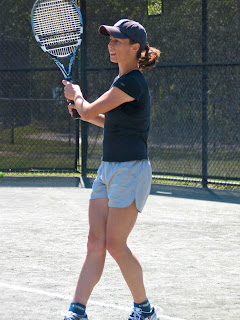 Let's begin with the announcement that Cara Black has now spent 100 weeks as the number 1 in the world!

I have a question: Does anyone know why Maria Kirilenko and Flavia Pennetta gave Casey Dellacqua and Francesca Schiavone a walkover in the third round? I haven't seen a reason for that. Too bad. What a terrible Australian Open for Pennetta.

Also, I was really disappointed when I realized that Black and Huber would not be playing Azarenka and Zvonareva. That could have been a good one. However, they will play Hantuchova and Sugiyama, and that should stir some excitement.

How far will Hsieh and Peng get when they play the Williams sisters?

Flavia had a foot injury.

I think the doubles competiton has really opened up to the Williams sisters. They are just too powerful for many of the other teams. Congratulations to Cara Black, particularly as her country is going through such times of adversity right now. Her success is a very prominent message.

Thanks, Lynn--you've confirmed my worst fears. Flavia has been playing on a bad foot for a long time now. This may be the time when she has to drop out and get the surgery. She's been putting that off for obvious reasons.

Yes, Sasha--Venus and Serena will be hard to beat.

Oh, but Flavia was just starting to really assemble her game and getting it to function well.