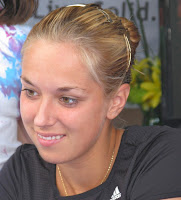 Marion Bartoli had great reserves of adrenalin that got her through the round of 16 at Wimbledon, but one had to wonder just when they would finally give out. The answer was clear today when the 9th seed--though she managed to get in one last fight--ran out of fuel. The fighting Frenchwoman has the tennis skills and the mentality to win just about any match, but even Bartoli has only so much physical energy. She was defeated by wild card Sabine Lisicki, a player who herself is no stranger to physical problems.

The circumstances were unusual. Not only was the Centre Court roof in place, but the rain and thunder were so loud, the players sometimes could not hear the ball being struck. The umpire had to shout so that they could hear the score.

Bartoli's serve was not raging the way it was in the previous round, and she wasn't hitting her groundstrokes with the same wicked angles. Lisicki used her admirable serve and a number of well-timed drop shots to wear the Frencwoman down. Lisicki took the first set 6-4, but she got a bit shaky in the second set, and Bartoli--who looked like she was spent--did what she has done throughout this tournament when she looked like she was spent: She fought her way to a tiebreak, which she won. It didn't take much of a stretch to think that Bartoli had somehow found a new gear, especially since Lisicki had failed to convert three match points.

But she didn't. She was utterly exhausted in the third set, even taking a seat during a changeover. Bartoli's demeanor was, in fact, dramatically different from the bouncing, shadow-striking "come get a piece of me" ball of energy she has been this season. It took Lisicki only 36 minutes to win the third set 6-1. She hit a total of 52 winners to move to the semifinals, in which she will play 2004 champion and 5th seed Maria Sharapova.

Lisicki requested a wild card and was granted it after she won the tournament in Birmingham. Her performance at Wimbledon has demonstrated that she is indeed "back," after enduring a series of illnesses and injuries. As for Bartoli--she is to be commended for fighting through this season in circumstances during which--not that long ago--she would have retired. Bartoli is just too talented to allow physical fragility to get the best of her.

A wild card, by the way, has never won the women's championship at Wimbledon.
Posted by Diane at 8:45 PM

I enjoy both Lisicki's and Bartoli's story. Bartoli has been fighting to the death and I think people can see that even though she ran out of steam today. Lisicki-it is good to see her back, happy and healthy. It was interesting that they both won a grass warm-up. Lisicki said that she had been misdiagnosed so that is why her recovery from injury took so long.

Did you notice the age differences in the semis between Wimbledon and RG?
At RG, Sharapova was the youngest at 24 with the other 3, 26 and over.
At Wimbledon, SHarapova is the oldest at 24, with the other 3 being 21 (Kvitova just turning 21, Azarenka and Lisicki near 22.)
Interesting huh? Don't know if it means anything.
It will be interesting with Clijsters out for so long. These women are having extra time and refining their games.

I don't know if it means anything, either, but it's interesting. Clay is more of a grinding surface, and grass is a quicker surface.

I heard Sharapova talking today about being perceived as a "veteran," even though she's just 24.