Li upset in 2nd round of Wimbledon

That noise you hear is the sound of seeds dropping onto the court. But we're not talking rye grass here; seeded players are being driven out of Wimbledon in dramatic fashion. Take, for example, 13th seed Agnieszka Radwanska, who was up 6-3, 5-4, 30-0 in her second round match today. Radwanska, who is a really good grass court player, lost that match. She was defeated 3-6, 7-6, 6-4 by Petra Cetkovska, who is ranked number 81 in the world. 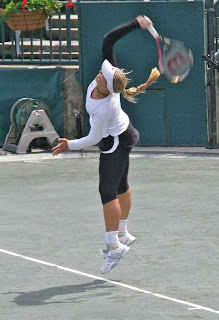 Then there was Li Na. The 3rd seed was under almost constant assault from a resurgent Sabine Lisicki, who hit 17 aces, and who knows how many serves that set up winners. Li calmly handled the assault in the first set, which she won, 6-3. I don't know how others felt, but my own feeling was that Li needed to win this match in straight sets. I've seen Lisicki (this year's Birmingham champion) in this mode before, and when she's in it, her service game gets better, not worse.

Lisicki continued to put pressure on Li in the second set. At 4-5, 30-40, Lisicki was put off balance by Li, but she leaned into a backhand and hit it crosscourt with such ferocity, you could almost hear the grass blades vibrate. It felt like a turning point, and it was. Lisicki won that set, 6-4.

The third set was thrilling in the way that a final is (or rather, should be) thrilling. Li broke Lisicki, and had two  match points on Lisicki's serve at 3-5. Lisicki  hit two hard, fast (over 120 mph.) serves, and made two quick points to save the match points. Then she hit a 124 mph. ace, and followed that with a 122 mph. ace.

The match, played under the Centre Court roof, went on. Li served for the match and went down 0-30, but caught up to go 30-all. The second point was an impressive forehand up the line. This save later became memorable because--in the latter part of the set--Li's forehand abandoned her (we've seen this before), leaving her on the court with her backhand and an opponent who couldn't stop hitting winners. She was broken in that game.

Then Lisicki went down 0-30, and shortly after, she was broken when she flubbed an easy put-away volley. The pattern continued: Li went down 0-30 when she served for the match a second time. She hit a series of forehand errors, and was broken at love. In her next service game, Li saved a match point, then saved another one with an ace up the T. But Lisicki got a third break point, which converted, winning the set 8-6, and advancing to the third round.

The French Open champion, considered a potential Wimbledon champion by many, is now out. Wild card Lisicki's next opponent will be Misaki Doi, and if she gets past Doi, she'll play either Cetkovska or Ana Ivanovic. Stosur, Jankovic  and Radwanska are out, but Li's upset is the one that opens the draw somewhat.

In other Wimbledon news, Simona Halep took a set off of defending champion Serena Williams, but Williams emerged the winner. Also advancing were Francesca Schiavone, Yanina Wickmayer, Dominika Cibulkova, and Julia Goerges, among others. Klara Zakopalova beat 31st seed Lucie Safarova 6-0, 6-7, 6-4. From time to time, Zakopalova can really impress with her game, and she went on a good streak today, breaking Safarova seven times.
Posted by Diane at 8:21 PM