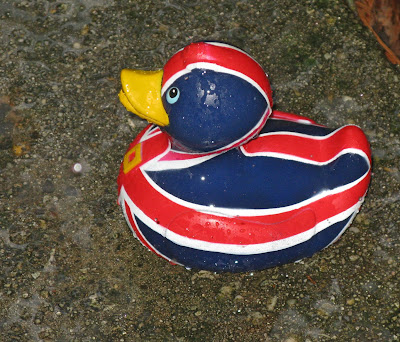 Maria Sharapova reached the Wimbledon final today for the first time since she won the event in 2004. Sharapova, seeded 5th, defeated wild card Sabine Lisicki 6-4, 6-3 in a match which did not feature either opponent's best tennis. Sharapova double-faulted thirteen times, proving that--when the pressure's on--her service game is still vulnerable. As for Lisicki--her well-known serve failed her. She emerged from the match with first and second serve percentages of 55 and 38, and, despite breaking Sharapova three times, never really capitalized on her opponent's problems because she could not sustain any momentum.

The first part of the match looked good for Lisicki. She immediately went up 3-0, and was a point away from going up 4-0, but then Sharapova turned things around, and Lisicki never really got back in for any appreciable length of time. The 5th seed broke her in the first game of the second set, and then Lisicki double-faulted on break point to go down 0-3. She broke Sharapova, but was broken back. When Sharapova served for the match at 5-3, Lisicki brought in some new energy, hitting big backhand and forehand winners. Sharapova hit an ace to make it 30-all, but then missed a backhand volley, a mistake she followed with a double fault. This was Lisicki's last chance, but she was broken at love, and it was Sharapova who advanced to the final.

There was more rain during the Sharapova-Lisicki match, but not enough to stop play. The umpire determined that play could go on, and before anyone could even open an umbrella, the drizzle was over.

The only person standing in Sharapova's way now, as she seeks to win a second Wimbledon title and establish herself as officially "back," is Petra Kvitova. The 8th seed defeated 4th seed Victoria Azarenka 6-1, 3-6, 6-2 in the other semifinal. The match--at least to me--was really about Kvitova, and was a microcosm of everything that is good and not-so-good about the Czech player. While I was watching, I recalled that night in 2009 when she took Dinara Safina out of the U.S. Open. I remember thinking: If this player could ever calm down, she would be dangerous. She did. And she is.

Kvitova is still a work in progress, though, despite the fact that most of the heaving lifting is behind her. After breezing through the first set today ("breezing" included whacking three consecutive aces when she served for the opening set), she pulled a bit of an Evonne Goolagong and drifted away in the second, making repeated forehand errors and getting tense about her serve. It wasn't all about Kvitova's mentality, however: Azarenka started pushing her around a bit, making her move in ways that were awkward for her. Azarenka also looked less flustered by Kvitova's serve in that set, and was able to take control.

Kvitova approached the third set as if the second had never happened, again showing one of her strengths. She went up 2-0 in that set, and--though she faced a couple of break points at 3-1--she held. Azarenka would win only one more game, and would be broken through double-faulting on Kvitova's second match point.

Azarenka played extremely well against Tamira Paszek in the quarterfinals, and has had a good tournament (though I still wonder if her Wimbledon would have been so good if Daniela Hantuchova hadn't shown up in the third round with a sore shoulder and a recent abdominal strain). She reached her first major semifinal, which is something about which she can feel good.

After seeing Lisicki play Li Na and Marion Bartoli play Flavia Pennetta, I found the semifinals a real letdown. This Wimbledon has been so thrilling, but today's matches were routine. The drama is still there, though--it's in the story, if not actually on the court. Not that long ago, some said that Sharapova was "finished"--that she would never win another major or be a huge factor in tennis, yet here she is, in the place where it all started. She hasn't won Wimbledon in seven years, and she hasn't won a major in three years, but she finally has an opportunity to win a fourth big championship.

First, though, she has to get past that pesky Kvitova. A Wimbledon semifinalist last year (she lost to eventual champion Serena Williams), Kvitova is the first left-hander to reach a major final since Monica Seles went to the French Open final in 1998. A few days ago, some players on the tour were asked to describe Wimbledon in one word, so I asked myself to describe Kvitova in one word. That word--regardless of what happens Saturday--is "inevitable."

Sabine Lisicki, by the way, probably had some of her disappointment soothed by today's doubles competition. She and partner Sam Stosur advanced to the semifinals when they defeated 6th seeds Nadia Petrova and Anastasia Rodionova 7-5, 1-6, 6-1. In the other semifinal, 2nd seeds Kveta Peschke and Katarina Srebotnik defeated Peng Shuai and Zheng Jie 6-2, 6-7, 6-4.

In mixed doubles, 14th seeds Cara Black and Leander Paez moved on when they received a walkover from 3rd seeds Srebotnik and Nenad Zimonjic.

In the girls' competition, 2nd seed Caroline Garcia won her third round match by defeating Anett Kontaviet 6-2, 6-7, 6-4. Top seed Daria Gavilova went out in the first round, as did French Open junior champion Ons Jabeur.
Posted by Diane at 4:28 PM

Looking for Kvitova win in the finals.