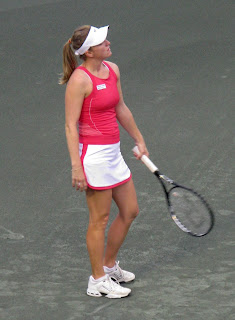 Just a week ago, the Bellefonte Country Club in Ashland, Kentucky had a new director of tennis supervising matters on the courts. That would be Julie Ditty, who has retired from the tour, played professional tennis for almost ten years. In 2008, Ditty broke the USTA Pro Circuit championship record for total titles won. At that time, she had won 32 singles and doubles titles--more than any other woman or man on the Pro Circuit.

Upon her retirement, Ditty had won 39 titles--30 of them in doubles--and still holds the record for total combined titles won. The 32-year-old Ditty, a left-hander, broke records when she played at Vanderbilt. She achieved her highest ranking in singles, 93, in 2007; in 2009, she was ranked number 66 in doubles.
Posted by Diane at 4:50 PM