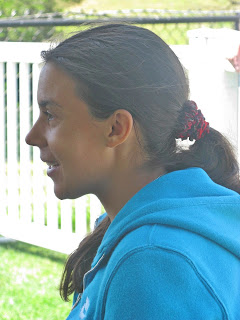 Marion Bartoli hadn't won a title since Stanford in 2009, though she reached the finals in both Strasbourg and Indian Wells this year. The 2007 Wimbledon runner-up had also never won a grass court title. But today changed all that. Bartoli defeated Petra Kvitova 6-1, 4-6, 7-5 to win the AEGON International in Eastbourne.

It wasn't an easy tournament for Bartoli. She had to save a match point in the first round, and by the time the final occurred, the windy conditions were at their worst. The semifinals and the final had to be played on the same day. Bartoli also had to get medical attention during the match. Her fortunes did not look good, but the 6th seed hung in, despite everything that was going against her, and won. And if we thought that Vera Zvonareva was the Rhiannon of the WTA, it's now clear that Bartoli is the co-goddess of windy conditions.

Billie Jean king famously said that pressure is a privilege. Petra Kvitova might say that pressure is a requirement. The talented 5th seed can just about always be counted on, in big matches, to drop the first set. And, unlike Thrill Ride--who genuinely seemed to have mental ups and downs in her exciting come-from-behind matches--Kvitova appears to be adrenal-shy at the beginning of a big match. She won only one game in today's first set, and appeared to be battling the wind more than she was battling her opponent. But, as expected, she started to put more spin on the ball in the second set, and she attacked Bartoli's serve with more confidence.

Kvitova took the second set 6-4, coming back to break after Bartoli had gone up 3-1. At 1-all in the third set, Bartoli winced when she stepped out, and she had to get some treatment for her leg. She came back, though (not always expected with the often-fragile Frenchwoman), and continued to control the ball in the wind as Kvitova used up a repertoire that consisted of everything from double-faulting twice in a row to hitting winners from all parts of the court. She hit a total of 40 winners, in fact, but old habits die hard, and the Czech player just wasn't consistent enough when it mattered.

"I was confused all week here," Kvitova remarked after the match, "because you have to fight against the wind and the other player."

Earlier in the day, the Bartoli had easily defeated 7th seed Sam Stosur 6-3, 6-1 in a rain-postponed semifinal match. In the other semifinal, Kvitova won the first set 7-6, and was up 4-2 in the second when opponent Daniela Hantuchova retired with an abdominal strain. Hantuchova has been playing extremely well, so here's hoping she is completely healed for Wimbledon play next week.

Top seeds Kveta Peschke and Katarina Srebotnik won the Eastbourne doubles title. They defeated 2nd seeds Liezel Huber and Lisa Raymond 6-3, 6-0. This is the third tournament the team has won this year; they now have five titles together.
Posted by Diane at 2:52 PM

The women have entertained us royally at wet and windy Eastbourne week.