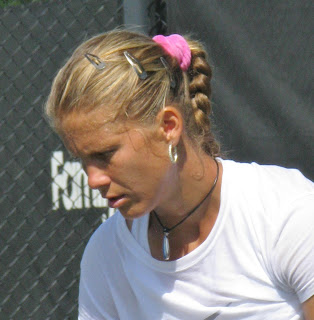 For the second year in a row, Sam Stosur is out of Wimbledon in the first round. Melinda Czink, who--in the past--has struggled with nerves, was as cool as the ice in a Pimm's today as she expertly unraveled the 10th seed's game. Czink, who recently returned from a long injury layoff, got tight a few times, but in each case, she immediately put herself back together, and quite simply, appeared to be everywhere on the court at the right time. Serving with the impressive first and second percentages of 71 and 68, Czink--who was once ranked as high as number 38 in the world--needed only and hour and seven minutes to dispatch Stosur.

The Australian wasn't the only high seed to make an exit. Jelena Jankovic, seeded 15th (that looks strange enough) has been sliced and served Spanish-style before by Maria Jose Martinez Sanchez, and today, it happened again. Jankovic played well in the first set, which she won, but Martinez Sanchez--who has had her ups and downs since returning from a knee injury layoff--put on a grass court show and defeated Jankovic 5-7, 6-4, 6-3. The Spaniard plays Monica Niculescu in the second round, and that should be an entertaining affair.

Magdalena Rybarikova, whose match against 4th seed Victoria Azarenka was stopped in mid-set because of rain yesterday, went back on the court today, stretched to get a ball, and hurt her knee so badly, she had to retire. Apparently, you don't have to be Azarenka--just being on a court near Azarenka is dangerous.

Iveta Benesova was behind throughout most of her match against countrywoman Sandra Zahlavova, but she won it, 3-6, 6-3, 8-6. And in the other all-Czech match--the battle of the Lucies--29th seed Lucie Safarova overcame Lucie Hradecka 2-6, 6-3, 6-3.
Posted by Diane at 8:56 PM