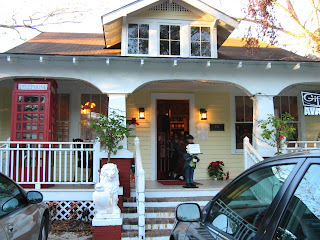 I met a friend for lunch at our local English Tea Room (the most authentically Brit tea room I've ever known outside of those in England) today. Some cheeky waiter popped a cardboard cutout of the Queen (Elizabeth, not Venus) in front of our table, and we had a good laugh as we checked out the lovely little sandwiches, the impressive menu of teas, and the newly manufactured cups commemorating the recent royal marriage. A very appropriate thing to do right before Wimbledon starts, you might be thinking, but it wasn't my idea (though it was a very good idea) to go there.

The truth is, I'm always a bit grumpy just before Wimbledon. For one thing, by mid-June, it's almost unbearably hot and humid where I live. But I also have to deal with feelings of letdown because my favorite major, the French Open, is over. Then I have to listen to "sports" announcers mispronounce the word "Wimbledon" and parrot cliches about tennis whites and strawberries that are as worn as the baseline grass on Centre Court in week two.

And then there's the constant description of Wimbledon as "the greatest of all" tennis tournaments, a claim based on nothing other than tradition, some of which has been undesirable. I don't think there is a "greatest" tournament any more than I think there is a "greatest" player. Wimbledon is as flawed as any other event: The grass does not play fast like it's supposed to (not to go into this subject now, but elements that include global climate change and a change in the type of grass seeds sown are said to be responsible for the relative slowness of the courts), and--though Wimbledon is the event most likely to be interrupted by rain--it's also the one that does not feature any tennis on the middle Sunday. And then there are the British journalists, who hold women in greater contempt than probably any other journalists in major tennis venues.

But this isn't to say that I don't enjoy Wimbledon; I do. I just don't enjoy a lot of the carrying on about Wimbledon. Actually, the tournament does hold a special meaning for me because--even though it was on a television set in my uncle's house in London--Wimbledon was where I first saw professional tennis played, and I became a fan at that moment. I was so excited about the tournament, and couldn't understand why my relatives didn't have any interest in securing tickets. They watched it now and then on TV the same way they watched the news and the comedies, but I had trouble taking my eyes off of it. The sight of Evonne Goolagong virtually staging a ballet on the court is an image that has remained with me for years and years.

I also tend to enjoy the outfits worn by the linespeople, even though they don't look very comfortable or practical. The white clothes worn by the players provide a nice touch, too, and one that isn't impractical. Of course, with Ted Tinling gone, pushing the white envelope has almost become a lost art. (Oh, to see Rosebud shock the crowds again.)

Even more, I miss seeing great serve-and-volley players like Martina Navratilova, Hana Mandlikova (one of my all-time favorites) and Jana Novotna. Amelie Mauresmo may have been the last of the breed.

Perhaps most of all, I miss the Duchess of Kent.

But there is also much to anticipate at this year's Wimbledon. For one thing, defending champion and four-time Wimbledon winner Serena Williams has returned, after having to spend almost a year off because of injury and serious illness. Williams, you will recall, won in 2010 without dropping a set, and hit 89 aces during the tournament. Her performance in the final was brilliant.

Venus Williams, the Queen of Grass, is back on the tour, too, after undergoing a four-month injury layoff. She has won Wimbledon five times. 2004 champion Maria Sharapova has shown improved form recently, and is widely considered to be a serious contender again. 2010 finalist Vera Zvonareva will be there, too, as will French Open champion Li Na, whose grass game could take her far. Add to the mix world number 1 Caroline Wozniacki, Sam Stosur, 2007 finalist Marion Bartoli, Petra Kvitova, Daniela Hantuchova, and Sabine Lisicki.

Kim Clijsters won't be there, which is a shame, but there is nevertheless plenty of potential competition. If you listen to Wimbledon Radio, you'll get to hear Virginia Wade. Of course, the Queen won't be there this year, but perhaps officials can bring out a cardboard cutout. Worked for me.
Posted by Diane at 10:22 PM

I have never bought any of the "Wimbledon is the best Slam" nonsense. We are incredibly blessed in our sport having 4 "world cup's" every season of equal importance, each Major unique and special in it's own way. The "Wimbledon Tradition" sell I believe is a nauseatingly overcooked anomaly in the modern age. At times we must look a very old country stuck in some kind of royal theme park to the casual outside observer.

I dislike: the flat Monday afternoon start (grand slam's should always start with a bang on a weekend day), the boring all-white clothing, the frumpily ridiculous dress code for court-side officials and especially the no-play on middle sunday. Grand Slam's are beast's of gathering momentum and drama: the rest day leaves us with too many marquee matches on the monday, all going off at the same time leaving the spectator not knowing where to look. In saying all that when the sun is beating down on SW19 and the stands are full... something very special is happening.

If Wimbledon is about to start it must be time to bring out the "Dame Virginia Wade" cardboard cut-out.

You gave me more reason to do some Mandlíková admiring on Youtube.

One thing I've noticed while watching matches from the past is how the Duchess of Kent is always chic and never dated (Steffi Graf's mother has a similar quality) I do miss her too. :-)

"stuck in some royal theme park" is such a great description. My mother was from London, so I have so many different feelings about Great Britain. Many of my family members live there. I grew up with everything British.

Thanks much, Anon. The Duchess of Kent was indeed quite chic. She cared so much about the players; her presence was really special. I remember reading that when Novotna decided to retire, she contacted Katharine, DK, first.

Well, my favorite major is also Roland Garros. I love clay and I love the rallies on clay. But it is the English time now and I do like the white clothing especially now that there is often trim that has color. I was wondering if the Duchess of Cambridge or her sister Pippa will be there. They are both athletes and are said to love tennis. There are so many story lines this year that I am just going to let it unfold.

Sorry about your weather. I have lived in South Carolina and Missouri so I know hot and humid. But where I am now-it is cool and sometimes rainy. I guess somewhat like England.

Curious. How do you mispronounce Wimbledon?

Sorry, Mel--I only just saw this. There are people who say "Wimbleton," but the common broadcast error is "WimbleDEN."

So, I do not actually believe it is likely to work.