Number One Sister rules in Paris 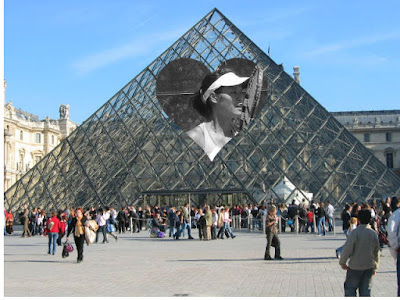 Sports history was made in Paris today when 29-year-old Li Na defeated defending champion Francesca Schiavone to win the 2011 French Open. Li, who defeated Schiavone 6-4, 7-6(0), is the first Chinese player to win a major tournament. And even though she was the runner-up earlier this year at the Australian Open, there was no way anyone would have logically predicted that the 6th seed would be the champion at Roland Garros.

For one thing, Li has never been a standout on clay courts. For another, her career suffered a significant decline after her run to the final in Melbourne. But tennis--and especially the French Open--is nothing, if not unpredictable. No one (except, perhaps, the Italian herself) guessed that Schiavone would win it all in 2010.

Li's run to the final was quite impressive. She had to start by going three rounds against Barbora Zahlavova Strycova, not a player one wants to see across the net in an opening round on clay. Li then defeated clayer player Silvia Soler-Espinosa, who also gave her a close contest. She then beat Sorana Cirstea in the third round, and in the round of 16, she lost the first set to 9th seed Petra Kvitova, but turned the match around when her opponent (for reasons involving her shoulder, her head, or both) suffered a collapse of form.

In the quarterfinals, the Chinese number 1 efficiently removed 4th seed Victoria Azarenka from the tournament, and in the semifinals, she sent home 7th seed Maria Sharapova home. Kvitova, Azarenka and Sharapova had all been named as potential winners of the event.

Getting through a tough draw doesn't guarantee one a trophy, however, as Sam Stosur so painfully learned last year in Paris. In order to hold the Coupe Suzanne Lenglen, Li would have to beat the defending champion, whose ability to get herself out of difficult situations is one of her greatest strengths. Not many thought that Schiavone would get to the final, either, but she did, and she did it the hard way, especially when--after going down 1-6, 1-4--she defeated Anastasia Pavlyuchenkova in the quarterfinals.

Of interest is the fact that both women have histories of not being able to close big matches. Schiavone overcame this problem a few years ago, and we have also seen Li remove this obstacle. There should not have been any doubt that in today's final, both players would play without fear. It was Li, however, who rose to the occasion, doing what she knew she had to do in order to overcome the clever and abundantly athletic Italian--pin her to the baseline and keep her there.

The 6th seed hit deep into the court, as she had done all week, and--for the most part--kept Schiavone away from the net, where she is capable of doing great damage. Li also served extremely well, and left the court with first and second service stats of 70 and 69. She had eight opportunities to break Schiavone, but she needed only two; Li broke once in each set. And in what may have surprised even the most astute of spectators, the woman known as the Great Wall of China was also an overwhelming success at the net.

Li took the first set 6-4, and broke right away in the second. At 4-2, the Chinese player just missed a chance to go up 5-2 and perhaps run away with the match. After Schiavone was able to cover the court more and get to the net, she hit two angled volleys in succession, and it appeared that things were looking up for her. They were: Serving at 4-3, Li's forehand betrayed her repeatedly, and she was broken. Schiavone began to look like Schiavone again.

I settled back to enjoy what I thought would be a third set, but then the match turned again. Serving at deuce, 6-5, Schiavone thought she had a set point when Li hit a backhand that was called wide. Li questioned the call, and the umpire overruled it, determining that the ball had skimmed the line, and was therefore a winner. Li went on to hold, which set up a tiebreak.

And it was the tiebreak that was probably the most unpredictable part of the whole match. Li immediately hit a forehand winner, and followed that with a backhand drive volley that shot across the court in almost laser-like fashion. Her momentum never ceased, as she went on to win every point in the tiebreak.

Li, who left professional tennis for two years, and returned on the condition that she run her own career instead of having it run by the Chinese federation, has led the Chinese women's tennis breakthrough from the start. Now she has accomplished something no other Chinese player has ever done: She has one won of the sport's four highly prestigious (and my favorite, I should add) events. The final in Australia and the championship in France--what's next for the hard-hitting, quick-thinking, wonderfully comic veteran? Like Schiavone, Li proves that--these days-- it's experience that creates opportunity.
Posted by Diane at 12:53 PM

I was psyched about this final bc I was going to be happy with whomever won. As the match wore on, however, I found myself really rooting for Li.

I really enjoy Schiavone but I couldn't escape the magnitude of a win for Li.

Ooooooh that tight line call was a big decision, would have given Fran set-point. Congrats to Li Na, overall the deserved champion. An excellent women's tournament at RG 2011, full of shocks, surprises and good tennis. And thank you to Diane for 'top-notch' blogging throughout.

A final contested by two fine female athletes with the combined age of 59 !!! Is 30 the new "rock'n'roll" in women's professional tennis ? Some Chinese philosophy for a slamless 26-year-old, allegedly beginning to feel her age. "A journey of a thousand miles begins with a single step."

Tight call? Not according to French TV Hawk-eye:

I think there's a margin of error in all technology, but when in doubt, stay with the call of the lines-person with the best view; don't overrule from the highchair far away. And don't put full credence in the powder splatter after the impact of a tennis ball.

I feel cheated out of a third set.

Fran was over-matched, out hit, but gritting her way back. After that overrule (do I hate questionable "high-chair" overrules!), she got knocked out of the zone. She was asleep the next point, and didn't win another point thereafter.

As Svente said, either was a worthy winner. I just wish it went the distance.

That's the first time I've seen the Hawk-Eye result, and I couldn't agree more about clay line calls because they are so messy.

I wanted a third set, too, though it was hard enough for me to watch two of my favorites for two sets.