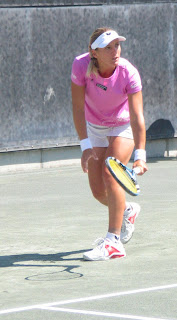 Sybille Bammer retired from professional tennis today. Bammer was defeated 6-1, 6-1 by Monica Niculescu in her first round at Wimbledon, and then quietly left the sport.

The 31-year-old left-hander from Austria reached a career high ranking of number 21 in the world in 2007. She reached the round of 16 of both the French Open and the U.S. Open, and in 2008, she reached the quarterfinals of the U.S. Open. Bammer was the champion in Pattaya City in 2007 and in Prague in 2009. It should also be noted that she retires with a career 2-0 record against Serena Williams.