Will Jankovic keep her promise to play less, or will she ruin what she has built? 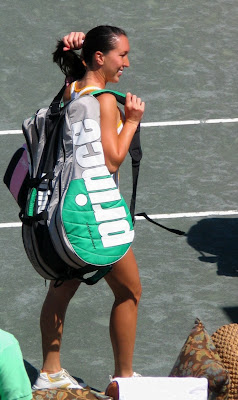 Here it is, mid-way into the Australian Open, and Jelena Jankovic has already played every week of the season, in addition to trying to play--twice--while injured during the Hopman Cup. She does not look like herself--how could she?--and she does not appear to have worked much on her serve, the one real weakness in her game.

There probably isn't a bigger Jankovic fan than I, and I feel she has let us, her fans, down. But that is not important. What is important is what she has done to herself by this brutalizing of her body and mind through constant play. Jankovic is very fit, yes, but fitness goes only so far. She says that she played so many matches last year because she prefers tournament play to practice. That is all well and good, but playing in tournaments takes away her ability to control her own schedule, and produces mental stress.

Jankovic's ranking is going to go down one way or the other, and it is better for it to go down by her player fewer tournaments than for it to go down because she can no longer compete at the level at which she competed last year. I love watching her play, and I want the best for her. She is so close to doing something really great, yet--at the same time--she is close to burning all of her opportunities. Here's hoping she makes the right decisions.
Posted by Diane at 11:02 AM

I kind of expected she wouldn't stop playing so much. Look, in December she said: "I will cut back a little bit on my schedule and play a lot less and mainly focus on the big tournaments, the Grand Slams and Tier Ones," and than just a few sentences later she said ""I don't have any expectations, I just want to play as many matches as possible and try to get back in form." It's like her mind is telling her to play less, but she simply needs to play "as much as possible." I don't know, I feel really sad when I see her so exhausted. Sometimes it's even scary.