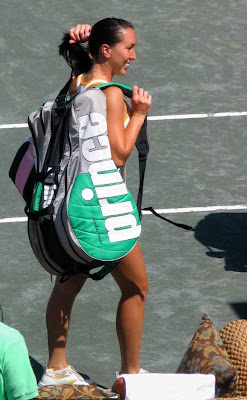 Happy JJ leaves the court after her high-wind championship victory in 2007
2007 Family Circle Cup champion Jelena Jankovic and 2003 and 2005 champion Justine Henin have entered the 2008 event, to be held in April on Daniel Island, near Charleston, South Carolina.

The Family Circle Cup is the oldest all-women's tennis tournament in the U.S., and one of only two clay events in the country. The green clay plays a bit faster than the European red clay, but if you like clay court tennis, the Tier I Family Circle Cup offers plenty of it. This is an exceptionally well-run tournament, with lots of player access and a very lovely and comfortable environment.

The Family Circle Cup was the first U.S. tournament Justine Henin won, in 2003. She could not attend in 2004 because of her virus, and in 2005, she was taken out in the semifinals by Patty Schnyder, who is the hands-down favorite in Charleston every year (she has been a finalist twice, once after mowing down all the top seeds). Last year, Henin had to withdraw because of respiratory problems.

Jankovic did not do well at all at the Family Circle Cup until her breakthrough year last year. She beat Venus Williams in a hard-fought semifinal, then skillfully weathered a torrential storm with very high winds (the final was almost canceled) to defeat Dinara Safina and win the tournament.

The 2007 doubles champions were Yan Zi and Zheng Jie, who defeated Peng Shuai and Tiantian Sun in the final.

Last year's scheduled line-up included not only Henin and Jankovic, but Mauresmo, Hingis, Sharapova, Kuznetsova, and Serena Williams. Not only did Henin withdraw, but so did Mauresmo (appendicitis) and Sharapova (shoulder and hamstring). At the last minute, Hingis and Kuznetsova also had to withdraw because of injury, and Serena Williams retired in the first set of her first match. To make matters worse, Schnyder, facing a sudden turn in the weather, made her exit in the second round. It could have been a disaster, but there were still plenty of good players--Jankovic, Ana Ivanovic, Safina, Vera Zvonareva, Sybille Bammer, and a very exciting wild card in the form of Michaella Krajicek.

Zvonareva's wrist injury, which took her off the tour for a long time, occurred in Charleston, and the tournament staff--to compensate for the let-down of a couple of cancelled matches (singles and doubles)--put together a doubles "exhibition" match that was one of the funniest things I've ever seen. Gisela Dulko, Flavia Pennetta, Liezel Huber, Katerina Srebotnik, and umpire Lynn Welch put on a show that made me ache, I laughed so hard for so long. My only regret is that no one at the tournament thought to videotape it.

This will be my fourth year to attend the Family Circle Cup, and I am excited about it. Someone I know called it the most fan-friendly sports event she had ever attended, and that does not surprise me.
Posted by Diane at 7:21 PM