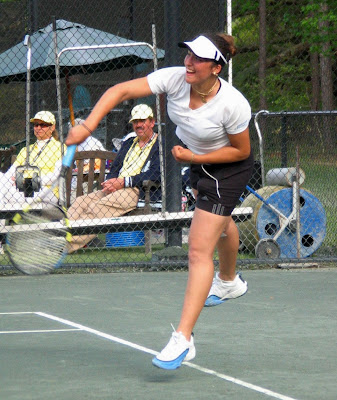 Aravane Rezai defeated Tatiana Golovin in the second round of the Australian Open
Though not seeded, it is nevertheless news that Lindsay Davenport was handily taken out of the Australian Open in the second round by a blazing Maria Sharapova. I did not get to see the match, but my understanding is that Sharapova made Davenport move a lot, and movement has always been Davenport's downfall. Final score: Sharapova def. Davenport, 6-1, 6-3.

The 13th seed, Tatiana Golovin, was taken out of competition by her countrywoman, the hard-hitting Aravane Rezai, 6-3, 3-6, 6-3. Rezai has had her share of troubles the last couple of years, but so far, is having a very nice 2008 season. Golovin--who became fitter and much more skillful under the tutelage of Mats Wilander--was certainly expected to advance much farther than the second round.