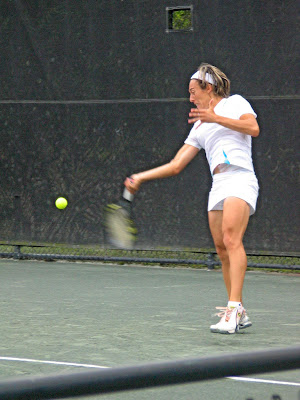 Francesca Schiavone will lead the Italian team in its Fed Cup match against Spain
When Italy won the Fed Cup title in 2006, it was largely through the marvelous efforts of Francesca Schiavone, whose fighting spirit overcame serious opposition from the Spanish team. Last year, Italy was in the finals, but lost to Russia. The 2008 Italian team has lost Robera Vinci and doubles specialist Mara Santangelo, but it still looks like a team to beat:

Francesca Schiavone is still the Italian player to watch at Fed Cup. Schiavone shines at this event, and can be counted on to perform well--and sometimes, brilliantly.

Flavia Pennetta, who was out with an injury for a long time, is now back and in form, having won the 2007 Bangkok Open, and beating both Shahar Peer and Venus Williams on the way to the final. Pennetta is also a successful doubles competitor.

Tathiana Garbin has had more success with doubles than with singles, but is one of those players whom higher-ranked players are not probably not keen on seeing on the other side of the net. Garbin and Schiavone, by the way, both have one-handed backhands.

Sara Errani made her first top 100 finish last season. People noticed her at this year's Australian Open because she took Lindsay Davenport to three sets (she had a 4-2 lead in the third set) in the first round.

Italy will play Spain in the upcoming Fed Cup round. The Spanish team consists of Anabel Medina Garrigues, Lourdes Dominguez-Lino, Virginia Ruano Pascual, and Nuria Llagostera Vives. Medina Garrigues is a talented but inconsistent player, who can be as tenacious as Schiavone. Ruano Pascual is a former doubles world number 1, and she and Medina Garrigues are currently ranked 22 and 21, respectively, in doubles.

great action picture of Francesca - she's always a joy to watch; so full of passion and enthusiasm! I'd love to see her have a really big win - maybe this tear; you never know...

Thanks, Claire. That is one of my favorite tennis photos I ever took. She is so much fun to watch, and she also has such a lovely backhand. Poor Fran--so close, so many times.