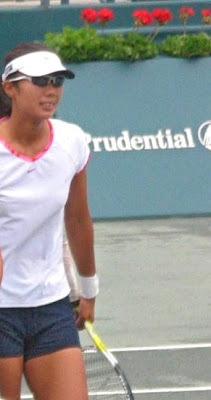 Sun Tiantian and her partner, Nenad Zimonjic, have won the Australian Open mixed doubles championship, defeating Sania Mirza and Mahesh Bhupathi, 7-6, 6-4. Mirza appeared to be suffering with some type of injury, making it more difficult for her and Bhupathi to fully compete. The match was nevertheless close, with the Indian team up a mini-break in the first set tiebreak before Sun and Zimonjic charged through. The second set featured more aggressive play by Sun, and she and Zimonjic were more dominant.

This is Sun's first Grand Slam title. She is the holder of 11 women's doubles titles and an Olympic gold medal.
Posted by Diane at 10:24 AM