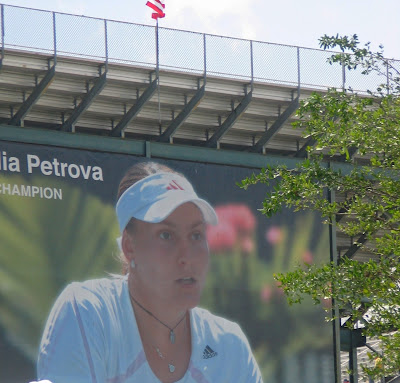 A banner bearing the image of 2006 champion Nadia Petrova hangs outside the stadium
Nadia Petrova, the 2006 Family Circle Cup champion, has entered the 2008 Charleston tournament. Petrova did not attempt to defend her title last year, but is returning now. In 2006, when she defeated Patty Schnyder to win the tournament, she was in the middle of a very hot clay streak, and was a favorite to win the French Open. She injured herself during her Roland Garros warmup, however, and went out in the first round. She has not really been the same since, and has been candid about her occasional lack of motivation.

Sorry but Petrova made the 4th round of the Aussie Open before losing to Radwanska.
Btw i like your blogs, but more positive writing on the russian girls would make me happier. ;p

I have no clue why I wrote 3rd round--thanks for the catch. It has been corrected.