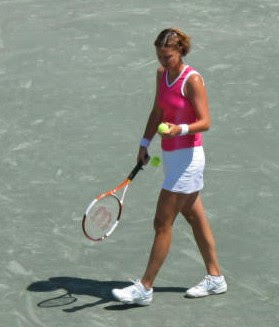 Can Lindsay Davenport make it past the second round?
Qualifying is now in progress, and the tournament begins Monday. The draw is out, and there is also a brand new surface. Expect continued heat illness, but--according to tournament authorites-- a decrease in heat problems because the surface will not reflect as much heat. I am skeptical about a reduction in heat illness, but I do think the new surface--which will not melt like the Rebound Ace did--will go far to prevent ankle and knee injuries.

Justine Henin--She is the world's number one player and she is playing at the very top of her form. Anyone who can get past Henin deserves to win the Australian Open, but it will be very hard for anyone to do that. Her athleticism, confidence and court intelligence are currently unsurpassed.

Serena Williams--The defending champion came from virtually nowhere last year and mowed down the competition. Can she do it again? It depends on which Serena shows up in Melbourne. The healthy and focused Serena can reclaim her crown, but that is not always the Serena who shows up.

Maria Sharapova--Sharapova had a bad 2007 because of two injuries--one really serious--and a resulting lack of confidence. She showed, in the Sony Ericsson Championships, that she was back, however. And Sharapova is just not the type to allow two bad seasons in a row to spoil her fun. She is looking very sharp, and she will have to stay sharp to get through what is probably going to be her second round--a match against Lindsay Davenport.

Lindsay Davenport--I almost took Davenport off of the contender list when I saw that she will most likely face Sharapova in the second round. Both history and current conditions indicate that Sharapova will win that match. But I think that some of the pressure is off of Davenport now, and she may be swinging more freely--at least metaphorically--in Melbourne. So I give her a chance to beat Sharapova, and if she does that, I give her a good chance to win the whole thing.

Venus Williams--Many analysts have Wiliams on the top contender list. I was tempted to put her there, too, but I am wary of her untamed forehand, which seems to fail her the most at big moments, Wimbledon notwithstanding. Still, it would be far from shocking if Venus Williams were to win in Melbourne.

Svetlana Kuznetsova--I was going to put Kuznetsova on my Players to Watch list until I saw her play Henin in the Sydney final. She lost, but the improvement in her game was notable. If she continues to add this much finesse and cerebral strength to what is already an athletically superior game, she is a contender.

Jelena Jankovic--As a fan, it is hard for me to say that Jankovic is not the contender in Melbourne that I thought she would be. Last year's crazy schedule took a lot out of her, as did her string of losses to Henin (or so I would imagine). But the extreme talent is still there, and if she has what it takes to rise to the occasion, she can go far.

Amelie Mauresmo--The 2006 champion missed almost an entire year last year, so she is not in line as a top contender. But she is Amelie Mauresmo, she likes the Australian Open, she is historically Henin's toughest competitor, and she says she is in top physical shape again.

Ana Ivanovic--Ivanovic is a very gifted player who, in my opinion, has improved her game more than anyone else in the past year. But she still has a tendency to melt at big moments, or to go lackluster. A lift in confidence, however--combined with that killer forehand--could get her somewhere.

Nicole Vaidisova--I'm sure others list her as a contender, but Vaidisova is still too unstable and error-prone to make one of my top lists. Nevertheless, she is one to watch in Melbourne.

Anna Chakvetadze--Which Anna will be in Melbourne? The savvy one or the mentally weak one? Things have not gone well for Chakvetadze lately: She was traumatized when her house was burglarized, and she is also recovering from a hand injury caused by an assault by the burglars. Chances are, Melbourne will not be a good venue for her, but knowing what she is capable of, I list her as one to watch.

Patty Schnyder--For me, she is always one to watch. Schnyder especially likes the Australian Open, and she was a semifinalist a few years ago. No longer in the top 10, Schnyder still puts on a good show with plenty of lefty spin, expert dropping and very well executed first and second serves.

Daniela Hantuchova--Hantuchova worked hard to get back into the top 10, and she enters Melbourne with nothing much to lose. Look for her to be a dangerous competitor.

Li Na--Since she was out for months last year, it is with some surprise that I put her on this list, but her win at Gold Coast says she is back, and we should keep an eye out for her.

Lucie Safarova--Not the most consistent of players, Safarova is nevertheless capable of playing some first-rate tennis. Her Wimbledon match against Jankovic was a stunner.

Tatiana Golovin--With much improved fitness and strategy, Golovin may finally live up to the reputation she gained when she made her first big breakthrough at age 17. Another breakthrough could occur this year.

Shahar Peer--Peer has inconsistency problems, too, but she tends to be tough, and her matches are rarely boring.

Of course, we do not know the makeup of many opening rounds because they involve qualifiers, but of the ones we do know, these are notable:

Kateryna Bondarenko v. Aravane Rezai: Rezai recently made it the finals of the ASB Classic, beating Katerina Srebotnik along the way. Bondarenko has been running hot and cold, but this has the makings of a good match.

Jelena Jankovic v. Tamira Paszek: This has the makings of either a dud or a thriller. The talented young Paszek could give a shaky Jankovic trouble, but more likely, a prepared Jankovic will will take care of business.

Dominika Cibulkova v. Flavia Pennetta: Pennetta is high on the comeback trail, and Cibulkova is a player I am watching closely.

Kaia Kanepi v. Alicia Molik: I think Molik is now strong enough in her comeback to get past Kanepi, but it may not be easy for her.

Caroline Wozniacki v. Gisela Dulko: I like Dulko for this, but she retired in the middle of her first round in Hobart because of a hip injury she sustained while playing in the Hopman Cup. As of three days ago, it had not healed. Wozniacki can rise to the occasion, and if Dulko is still hurting, the Danish player could take her out.

Tathiana Garbin v. Eleni Daniilidou: Daniilidou, who just emerged the winner at Hobart, is having a good season opening, and one would expect this to be a good match.

Meilen Tu v. Maria Kirilenko: This is worth watching because Tu is one of those players who, once in a while, likes to take down somebody with a decent ranking.

Nadia Petrova v. Nicole Pratt: This match is bound to be entertaining, and no one should be too shocked if Pratt, with little to lose, overcomes the troubled Petrova, though I do suspect the Russian to get to at least the second round.

As we learn which qualifiers play whom, I'll post more interesting first round matches.

In the meantime, everyone is getting ready for the second round because--unless something goes very wrong--that round will feature a match between Maria Sharapova and Lindsay Davenport. It is a real shame for Davenport that she has to meet Sharapova in such an early round. Anything could happen.
Posted by Diane at 4:25 PM

Whoa there! I'm an admirer of Davenport, to be sure. What a terrific ball striker. But you really give her a good chance to win the Aussie Open if she beats Sharapova? Goodness, she's in Justine's quarter! This story is an old one. Lindsay won their first 5 matches, before Henin was Henin. She last beat her in 2002(!) and has lost 7 straight. I watched six of those matches and Lindsay is just at such a disadvantage in footspeed. She can get on a roll and win a few games, but Justine always finds a way against her. Bad luck for one of my favs, but Davenport goes out in the QFs. I do think she'll stun Maria though :>

I give her a small chance, yes. To me, she stands as much chance as anyone (in the top rung of tennis)--other than perhaps Sharapova--of beating Henin. I think Henin will win the event, I should add. But I like where Lindsay is psychologically right now (as much as I am able to assess that), even though--if I'm going to be a realist--I would have to have only two "contenders"--Henin and Sharapova.

People smirked at me when I predicted Bartoli would beat Henin at Wimbledon, so what the hell?!

Well, you have a right to point out Bartoli...for years to come :> I think if Lindsay can upset Maria she'll consider it a great tournament's work. I don't believe that she believes she can beat Henin, with good reason if history and respective ages and athleticism are any judge.

As for Sharapova, it's interesting that many consider her fully resurrected on the basis of one tournament, the YEC. She's coming off a down year (for her) and has played a total of six WTA matches since the US Open. My guess is that her form will not quite be there for the Davenport match, allowing Lindsay to advance. I give AnaIvo, or even a highly motivated Serena, a somewhat better chance of knocking off Justine. Finally, don't forget that Henin must get by Golovin in a probable 4th round matchup. An upset is not likely but not impossible. All in all, the Aussie Open should be packed with excitement -- I can't wait.

I agree with everything you say, Jen, though I like to think that at least a part of Davenport believes she can beat Henin.

I am not basing my own hunches about Sharapova solely on her YEC performance, but also on the strength of her will. But she is still rusty, of course.

If Golovin comes in with her smart, post-Wilander play head on, she is indeed an upset possibility. I don't know how consistent Golovin is going to be, but I am quite impressed with her new game, and it is a smart enough game to give Henin some trouble. Provided nothing strange happens in the first three rounds, that ought to be an excellent match.