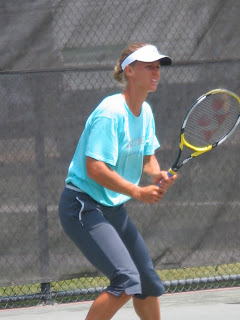 It's an old rivalry, and one that used to be even, but lately, it has belonged to Elena Dementieva, and she put an even stronger hold on that dominance this morning, when she defeated Patty Schnyder, 6-2, 6-3. Schnyder had a fairly good first set in terms of effort, but the change-ups for which she is known appeared to have no particular effect on Dementieva, who was fully prepared for them. There were a few spirited rallies and some very nice shot-making, though Schnyder faded in the latter half of the second set. Both players served well, and both went for the far angles over and over. But Dementieva was able to hit hers with considerably more accuracy, and committed only 14 unforced errors, compared with Schnyder's 29.

Dementieva will play the winner of the quarterfinal match between Sybille Bammer and Jelena Jankovic.
Posted by Diane at 11:54 AM