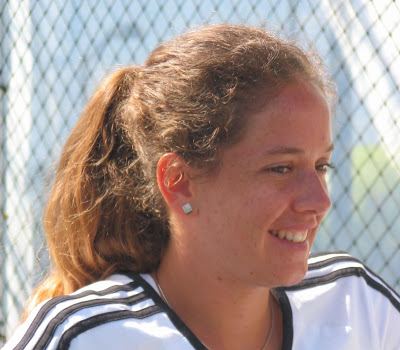 After Patty Schnyder won in Cincinnati in 2005, she went to seven finals and lost them all. Most of them were big contests--Nadia Petrova beat her in Charleston (after Schnyder had defeated Justine Henin in the semifinals), old rival Daniela Hantuchova beat her in Zurich, and Serena Williams beat her in San Diego.

As a fan, I was proud that she made the finals of the top tournaments, rather than playing in smaller ones. In fact, her consistency was excellent. But I was also frustrated that she did not win even one of these finals.

Schnyder's run at the 2008 U.S. Open seems to have filled her with confidence, and she went to Bali in very fine form, defeating her friend Tamira Paszek today to take the title. To get to the final, Patty defeated Yuan Meng, Marta Domachowska and Nadia Petrova. Paszek's path to the final was impressive, especially for an unseeded player: She defeated Anna-Lena Groenefeld, Sara Errani, Flavia Pennetta, and top seed Daniela Hantuchova.

Schnyder's victory was also her 500th career match win. Her back was bothering her in Bali, so she has withdrawn from the tournament in Guangzhou. She now goes into the European indoor season, which has always favored her. In fact, she was close to a win in Linz in 2005, but injured her hand during the final. Playing one-handed for the remainder of the match, she lost to Nadia Petrova. That was Petrova's first tournament win. And last year, of course, Schnyder lost to Hantuchova on an indoor court in Zurich.