Serena to the semis, and what a way to go! 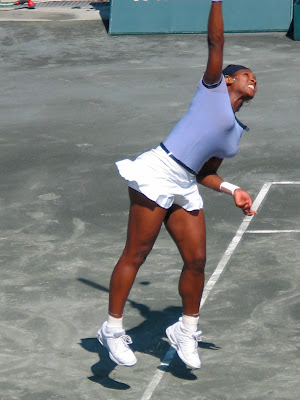 If this quarterfinal had been a movie, it might have been called My Sister, My Nemesis: Judgment in New York...or maybe just...Run Serena Run! If ever Serena Williams' athleticism were on display, it was tonight. She ran, she dove, she did full splits, then she ran some more. And some more. That was because her determined, fireball-tossing sister made her run and run and raise her game to an amazingly high and exciting level.

I usually do not care that much for Williams sisters matches, but I had a feeling this match was going to be one for the books, and it was. Venus was a break up at 5-3 in the first set, but her sister caught up with her. Then she had two set points in the tiebreak, but Serena would not have it. As dramatic and close as the first set was, it was nothing compared with the second. The tiebreak of that set featured what will probably turn out to be the point of the tournament, on the women's side; it may wind up the point of the season. I would describe it, but you had to be there, so to speak.

Venus looked like she was going to take that set a couple of times. Again, she was up 5-3, but again, things did not go her way. And while giving Serena full credit for playing at the top of her game, there is no getting away form the reality that Venus went to pieces mentally. Her forehand betrayed her, as it always does when she gets tight, and the atmosphere became charged with a sense of inevitability for her sister. The short version: Venus had eight set points in the second set, and failed to convert any of them. Serena took the match, 7-6, 7-6.

Dinara Safina is going to have her work cut out for her.
Posted by Diane at 11:47 PM

"Even their undergarments were dramatic."

I was going to say something about the same thing, but I wasn't quite sure how to say it without it sounding, well, you know, "odd." ;)

I hesitated, myself, but it all just seemed so...meant to be. Like it was staged by the head of the Jungian Crosscourt Society.