Williams sails through the wind and into the final 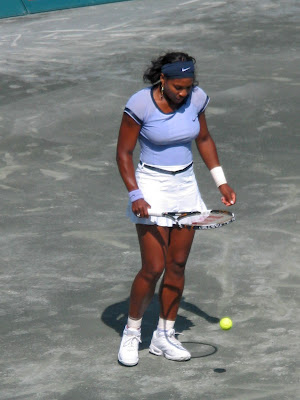 Dinara Safina has had a wonderful summer. She will most likely win a major next year. But not this year. Safina, unable to handle the weather in her semifinal match against Serena Williams, saw her U.S. Open hopes sail with the wind. Most of us regress under stress, and Safina was no exception today. As she made error after error, or was outplayed by Williams, she exhibited the negative body language we used to see from her on a regular basis.

"I hate the wind!" she yelled, much as she yelled at the weather in her 2007 Family Circle Cup final. And--as in 2007--her yelling did no good. The wind kept gusting, and Williams kept coming at her until she took the match, 6-3, 6-2. She will play Jelena Jankovic in the final.
Posted by Diane at 6:15 PM