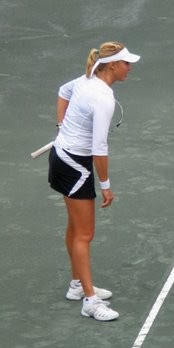 We all knew it was coming, but that doesn't make the news any easier to hear. Popular and talented Alicia Molik has announced her retirement from pro tennis, citing the obvious reason--the debilitaing results of serious illness and injury. The 27-year-old Australian, well liked on the tour and cheered by fans all over the world, was expected to become a major Australian singles and doubles star, but--like so many promising athletes--she was betrayed by her body.

In 2004, Molik won a bronze medal at the Olympic Games. In 2005, she and Svetlana Kuznetsova won the doubles title at the Australian Open, and she reached the quarterfinals in singles at that tournament; many will remember her dramatic third set, 9-7, loss to Lindsay Davenport. Molik soon reached a career high ranking of 8 in the world, and became one of the top servers on the tour.

Later that year, however, something bad happened: Molik was diagnosed with vestibular neuronitis. She was out for months--though not as long as she had expected--and when she returned in the spring of 2006, she entered the top 200 toward the end of that year.

Molik won the 2007 Australian Open wild card playoffs, and she made it to the third round of the tournament, when she was taken out by Patty Schnyder. She then entered the top 100, and made it to the second round of Wimbledon, but was defeated by Serena Williams. However, she and partner Mara Santangelo advanced to the semifinals in doubles, and she and partner Jonas Bjorkman were the finalists in mixed doubles.

This year, Molik went out in the second round of the Australian Open. A leg injury and a bad case of golfer's elbow got the better of her, and her retirement began to look more and more likely. She was thrilled to recieve a wild card to the Olympics, but she lost in the first round. That seemed to be the turning point. "I've had eleven years on the tour," she said, "with a bit of injury time in and out, that's a pretty unbelievable career, I think. I'm a bit of a realist. I felt like I've been ready for a long time. Instinct tells me to move on to something else."

It's a sad day for Australian tennis, and I think I speak for all fans when I say it's a sad day for us. Molik charmed the tennis world with her strong serving, superb doubles play and Aussie charm. She is warm and funny. and a first-rate sportswoman. She will be missed.
Posted by Diane at 8:08 PM

Totally argree with you a nice article. It is a sad day for tennis with Alicia retiring but not totally unexpected.

I hope what ever Alicia decides to do in future it makes her happy and bring her fulfilment.

need some help one more and i get pics unlocked