Top seed out in Tokyo quarterfinals, and Srebotnik pulls another upset 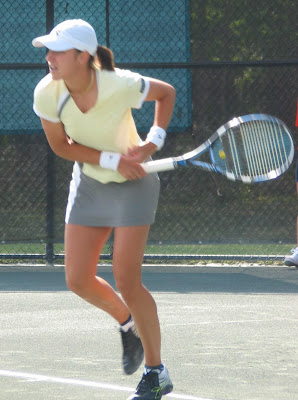 Katarina Srebotnik is having a season of upsets; this time, the victim was Elena Dementieva
Top seed Jelena Jankovic was defeated today in the Toray Pan Pacific quarterfinals by Svetlana Kuznetsova. The bigger upset, however was that of Elena Dementieva, who lost to Katarina Srebotnik. Srebotnik had to qualify to get into the tournament, which I do not understand, but there you have it: A "qualifier" beat Dementieva. More accurately, Srebotnik--who has been having a time of it upsetting top players this year--has done it again.

If Jankovic had gone on to win this tournament, she would have become number 1 in the world again. But even though she is gone, there are some fairly significant ramifications for the remaining four women:

Kuznetsova: She has not had one tournament win this year, which is shocking and--for her--has to be demoralizing. A win in Tokyo would probably be a be relief for Kuznetsova.

Srebotnik: She took Serena Williams out of Roland Garros and Kuznetsova out of the U.S. Open. A win in Tokyo would vault her into the next level of the tennis heirarchy and undoubtedly provide her with a huge confidence boost.

Dinara Safina: There are always doubters, and as I write this, I'm sure there are people (I'm not one of them) who believe Safina has already had her time in the sun. A win in Tokyo would further establish her as a major threat--period.

Nadia Petrova: Petrova was the Russian who was expected to break out first, and with good reason--she is loaded with talent. But a bad court temper and a lack of confidence held her back. She did not even win a tournament until the end of 2005, and she probaby won that one because her opponent had to play the last half of the match with one hand. But it gave her the confidence she had been lacking.

She blew everyone way during the 2006 clay court season, and was poised to spoil the party for Justine Henin at the French Open. But during a pre-French Open practice session, Petrova became injured. The injury was bad enough that she lost in the first round, and that seemed to trigger a downward spiral. She went from coach to coach, told the world that she had lost her motivation to play, and saw her ranking fall.

Things have gotten better for the bright, affable Russian. She has been steadying herself of late, and a win in Tokyo would perhaps mean more to her than to any of the last four.