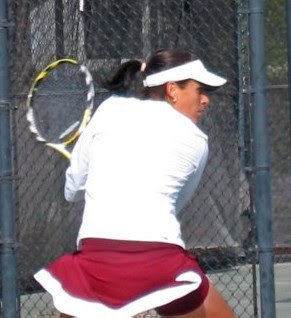 Anabel Medina Garrigues used her backhand well in today's U.S. Open doubles quarterfinal
Anabel Medina Garrigues put her wicked backhand on display over and over today in the quarterfinal match she and partner, Virginia Ruano Pascual, played at the U.S. Open against Raquel Kops-Jones and Abigail Spears. The match was a spirited one, with many momentum changes, some terrific shot-making, and some heart-breaking moments. The quality of play was high from both teams, and there was plenty of variety for the fans. It was Medina Garrigues, however--whose wide runs, followed by sharp backhand cross-court angles--produced most of the thrills. Her partner's shots were nothing to sneeze at, either.

There was a terrible moment for the American team in the third set, when they had a chance to break the Spanish team, even things up and force a tiebreak. Obviously nervous, Spears flubbed two easy volleys, and it was the beginning of the end. But throughout the rest of the match, Spears performed well, as did her steady-serving partner, Kops-Jones.

In the other quarterfinal, top seeds Cara Black and Liezel Huber defeated Yan Zi and Zheng Jie, 6-4, 6-3.
Posted by Diane at 3:05 PM