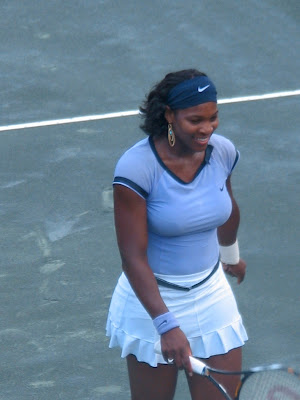 I didn't think anything could come close to the Venus and Serena quarterfinal a few nights ago, but then I saw the 2008 U.S. Open final tonight. One (especially if that one is a Jankovic fan) could argue that Jelena Jankovic turned missed opportunities into a heartbreaking loss, just as one could make that argument about Venus Williams in the aforementioned quarterfinal. But it is no coincidence that opponents keep losing precious opportunities when Serena Williams is on the other side of the net.

Jankovic got off to a good start in the first set, breaking for a 3-1 lead, then went directly to 40-0...and was broken. I made a note of that frustrating incident because I wondered whether it would become somewhat of a theme of the match--and it would. Jankovic is used to always coming from behind. As a primarily defensive player, that is what she does. But coming from behind against Williams when Williams is playing at her best means that one is always about to take another step backward. Sure enough--in that first set--down 2-5, Jankovic broke, held her service game, but wound up losing the set, which Williams took at 6-4.

The second set was pure drama. Down 0-40 in her first service game, Jankovic saved three break points to hold. She later saved two break points to go 3-all. In an unusual move (and one I have been wanting to see for months) umpire Alison Lang wound up calling for the challenge (actually, it's a "review" when an umpire asks for it, only umpires are reluctant to do so) in a contested point.

Serving at 5-6, Jankovic saved a match point, got a game point to go to a tiebreak, then double-faulted again, giving Williams an opportunity to break, which she did, on her second match point.

Jankovic's serve is certainly better than it used to be, but there is no doubt that a greater improvement in that category would have made a difference for her tonight. Her defensive play is the best on the tour; a really good serve would make her very dangerous and save her from having to work so hard. Nevertheless, her relentlessness and her superb ability to work the court caused some major momentum shifts in the final. The match should have gone to three sets, and I certainly thought it was going to. But even at two sets, the excitement created by some of the rallies turned the match into an out-and-out thriller. Both women hit shots that would have made the heads of other players spin. There were repeated gasps from the stands. In the end, Williams used her crack serve and her dominating net play to make the difference.

This win--Williams' third U.S. Open title--gives her nine majors. She won the championship without dropping a set, and she is now number 1 in the world.

At the awards ceremony, Jankovic looked crushed, and I have never seen her look that way before. She got her interview with Mary Carillo confused with the finalist acceptance speech she was supposed to give a bit later, and did all of her thanking and acknowledging early, causing Carillo to interrupt her and ask "Don't you want your check?!" "No," Jankovic replied. "I don't want my check; I want to keep playing here."

I think she meant it.

This was Jankovic's first final in a major. Against anyone else in the draw, it is likely she would have won it. But Serena Williams was clearly on a mission, displaying world number 1 tennis throughout the match, and also exposing the vulnerabilities in her very gifted opponent's game.
Posted by Diane at 11:16 PM

This was a great match to watch, I really enjoyed it. I do think, however, that jankovic allows herself to become too distracted by the big screen and loses a bit of focus on her tennis. I'm not sure if that changed anything today but I think that maybe she needed to focus a little harder on what she was doing.

I suspect she does it, consciously or not, as a way to keep from getting tight. Whether that works for her or against her, I don't know. Jim Courier was known to take a novel onto the court and read it during the change-overs.