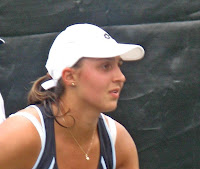 Who saw it coming? Tamira Paszek took out Marina Erakovic in the first round of the AEGON International, then 8th seed Daniela Hantuchova in the second. Her next accomplishment was to beat grass court trickster Tsvetana Pironkova, though she got some help from Pironkova's aching back. In the semifinals, the Austrian player beat world number 9 and former Wimbledon finalist Marion Bartoli. Today, she saved five match points and defeated world number 8 Angelique Kerber, who appeared to be on her way to taking her third title of the year. In doing so, Paszek also broke Kerber's streak of 15 3-set victories.

The crowd couldn't have asked for more. Kerber took the first set 7-5, and Paszek won the second, 6-3. The third set was an exciting, well-played, drama-filled exhibition in which Kerber held five championship points, only to watch them all obliterated, primarily by Paszek's lethal backhand. Paszek had to have her ankle treated; there was a late, iffy call that did not bode well for Kerber; Kerber saved two championship points. But in the end, the toughness of the Austrian seemed to overcome Kerber mentally, and Paszek won the final set 7-5. This is her first premier-level victory.

Paszek gets world number 7 Caroline Wozniacki in the first round at Wimbledon. Stay tuned.

The reunited team of Nuria Llogostera Vives and Maria Jose Martinez Sanchez, seeded 4th, won the doubles championship when top seeds Liezel Huber and Lisa Raymond retired after the first set (won 6-4 by the Spaniards). The retirement was brought about by an injury to Huber's right thigh.

Meanwhile, over in Den Bosch, at the UNICEF Open, Nadia Petrova won the championship by defeating Urszula Radwanska 6-4, 6-3. And Sara Errani and Roberta Vinci did it again--the season's hottest doubles team won the tournament by defeating Petrova and Maria Kirilenko 6-4, 3-6, 11-9. Errani and Vinci were the top seeds; Kirilenko and Petrova were seeded 2nd.

This marks the Italian team's 23rd straight match win, and also their seventh title of the season--and this one was on grass, their "poor" surface. Errani and Vinci are seeded 2nd at Wimbledon, and they play their first round against the Czech team of Eva Birnerova and Petra Cetkovska.
Posted by Diane at 1:37 PM

Paszek making a comeback? Or is it just this late bloomer thing we are seeing? She will be 22 in November(?). I was looking at my scores from the 2007 USO where 4 teenagers took out 4 seeds (Sharapova, Petrova in the top ten and Schnyder and Hingis, 13 and 16 respectively). Those 4 teenagers were Azarenka, Radwanska, Szavay and Paszek. Well we know what became of the first two. Szavay has a back problem that has kept her out after a good start. Paszek has had a couple of long injuries(one a back that kept her out a 1/2 year) but now has won Eastbourne. Interesting.

Paszek has been injured over and over. She had father and coach issues, too. Maybe a late bloomer, but I'll need a lot more evidence. It would be really nice, though.

I get the feeling that Szavay is done--but I hope not.