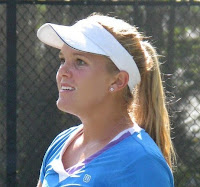 This is not the time to go into Oudinology--everyone already knows it, anyway. But it is time to announce that the winner of the 2012 AEGON Classic is Melanie Oudin. In a final that was delayed because of inclement weather in Birmingham, Oudin defeated 5th seed Jelena Jankovic 6-4, 6-2 today, to win her first WTA singles title.

To get within reach of the trophy, Oudin took out 10th seed Sorana Cirstea, Michelle Larcher De Brito, Elena Vesnina, Irina Falconi, and 8th seed Ekaterina Makarova. Before entering the main draw, the 2009 U.S. Open quarterfinalist had to qualify. In the qualifying rounds (in which she was not seeded), she defeated Bibiane Schoofs and Gail Brodsky.

Oudin, who reached the Wimbledon round of 16 in 2009, is currently ranked number 208 in the world, though she has been ranked as high as 31. Next week, she will be ranked number 122.

The 20-year-old from Marietta, Georgia has a wild card into the main draw at Wimbledon. Things are looking up.
Posted by Diane at 8:49 PM